This aerial view shows a bridge leading to the inundated Tianxingzhou island, which is set to be a flood flowing zone to relieve pressure from the high level of water in Yangtze River, in Wuhan in China's central Hubei province on Monday (July 13, 2020.) Various parts of China have been hit by continuous downpours since June, with the damage adding pressure to a domestic economy already hit by the coronavirus pandemic. - AFP

SHANGHAI, July 13 (AFP): Floods across central and eastern china have left more than 140 people dead or missing and are swelling major rivers and lakes to record-high levels, with authorities warning that the worst was yet to come.

The coronavirus ground zero of Wuhan, through which the Yangtze River winds, is on an expanding list of population centres watching warily as the powerful river's levels in the city of 11 million have hit their third-highest in history and are projected to rise further through the week, according to state-controlled media.

Summer flooding has been an annual scourge since ancient times, typically focused in the vast and heavily populated Yangtze basin that drains central china.

The downpours have intensified since last week, causing waters to spike higher and the government to ramp up alert levels.

Thirty-three rivers have reached record highs and alerts have been issued on a total of 433 rivers, officials from the Ministry of Water Resources said during a briefing in Beijing on Monday.

Video broadcast by Chinese state-run media at the weekend showed cities and towns inundated by water that rose in some places to the roofs of single-story homes, as rescue personnel evacuated men, women and children aboard inflatable boats.

Elsewhere, homes were shown flattened by landslides that had tumbled from water-logged hillsides, while workers used diggers to construct makeshift levees to contain floodwaters.

The worst-hit provinces were Jiangxi, Hubei and Hunan in central china, Anhui, Zhejiang and Jiangsu in the country's east, and the southwestern mega-city of Chongqing, authorities said.

Illustrating the growing alarm, President Xi Jinping called on authorities in affected areas, including People's Liberation Army (PLA) units, to mobilise for the rescue and resettlement of stricken residents and to shore up flood defences.

"(China has) entered the critical period for flood control," Xi said, according to a government statement.

"(Communist) Party committees and governments at all levels should courageously focus on their duties."

Water levels in Poyang Lake in Jiangxi, which drains into the Yangtze and is the largest freshwater lake that is fully within china's borders, rose to a record high on Sunday, according to the Jiangxi provincial government.

Two other major bodies of water, Dongting Lake in central china and Taihu Lake in the country's east, have risen above "alert" levels, according to the Ministry of Water Resources.

china's worst flooding in recent decades came in 1998 during an El Nino weather effect, killing more than 4,000 people, mostly around the Yangtze.

The Yangtze is the third longest river in the world after the Nile and the Amazon and its drainage basin is home to around 400 million people -- one-third of china's population.

Flooding occurs naturally each summer due to seasonal rains and glacial melt in the river's Tibetan plateau headwaters.

But the threat has worsened over the decades due in part to widespread construction of dams and levees that have cut connections between the river and adjacent lakes and floodplains that for centuries had helped absorb the summer surge.

Conservationists also warn that the rapid melting of Himalayan glaciers due to climate change may lead to more dangerous summer flooding. Reuters, in the other hand reported that, as many as 33 rivers in China have risen to their highest levels in history during the current wave of floods, a senior water ministry official said on Monday, as regions across the country brace for another "grim" week of torrential rain.

Ye Jianchun, vice minister of water resources, told a briefing that 433 rivers - as well as major lakes like the Dongting, the Poyang and the Tai - have all risen beyond their warning levels since the flood season began in June.

"Going into the key flood-prevention period of late July to early August, the current trends remain grim on the Yangtze and the Lake Tai basins," he said, adding that the belts of heavy rain that have lashed central China would eventually head north.

Average rainfall has been at its highest since records began in 1961. The emergency ministry said last Friday that 141 people were dead or missing, with economic losses at around 60 billion yuan (US$8.57 billion).

Flood-control authorities throughout the Yangtze basin have already declared "red alerts" that cover major population centres such as Xianning, Jiujiang and Nanchang.

A red alert has also been declared at the Poyang lake, where water levels are more than 3 metres higher than normal, another record high.

In some flood-stricken regions, soldiers filled sandbags to shore up riverbanks and stave off more damage. Town streets were inundated, and rescue workers waded through hip-deep water with inflatable boats to reach people trapped in homes turned into islands.

According to water ministry data, warning levels were breached at more than 70 flood-monitoring stations on Monday. Water levels at the Three Gorges reservoir, which cut its discharge volumes for a fifth time on Saturday to ease downstream water levels, have now hit 153.2 metres, 6.7 metres higher than the warning level.

China's weather bureau said that although some regions in the southwest would see a temporary respite from the heavy rain on Monday, central and eastern China would continue to bear the brunt of the storms. 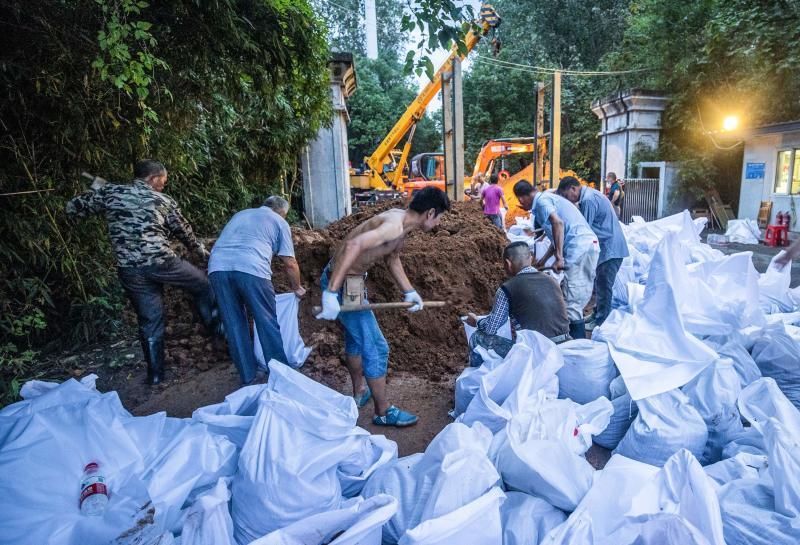 Workers preparing anti-flood measures at a gate of a park along the Yangtze River in Wuhan in China's central Hubei province. Various parts of China have been hit by continuous downpours since June. - AFP

Their construction is to shore up China's major water conservancy facilities and ensure national water security, as the country faces shortage of per capita water supply and uneven distribution of water resources.

The total investment in the projects is estimated to reach 1.29 trillion yuan (US$184.38 billion), which is expected to drive investment of about 6.6 trillion yuan and offer about 800,000 job positions annually on average, Su said.

To raise funds for the projects, the reform of a market-oriented, law-based investment and financing system must be deepened through establishing fair, open and transparent market rules, he stressed.

So far, some 52.8 billion yuan of the central government's budget investment had been allocated for the construction of the major projects, according to the official. 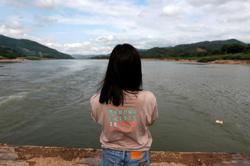