A student checking the body temperature of her classmates in a classroom in a high school in Wuhan in China's central Hubei province. High schools in Wuhan reopened on July 10 after the start of the term was delayed due to the coronavirus outbreak. - AFP

This marked that the Chinese capital city had reported no new confirmed domestically transmitted Covid-19 cases for six consecutive days.

No asymptomatic cases or suspected cases were reported.

A total of 11 patients were discharged from hospital after recovery on Saturday in the city, the commission said in a daily report.

From June 11 to July 11, the city reported 335 confirmed domestically transmitted cases, of whom 240 were still hospitalised and 95 discharged from hospital after recovery.

There were 21 asymptomatic cases under medical observation, the commission said.

Meanwhile, there were also no new confirmed, asymptomatic or suspected cases of the virus were reported in central China's Hubei Province on Saturday, the provincial health commission said Sunday.

By Saturday, Hubei had four asymptomatic cases, including two in Wuhan, the provincial capital city.

A total of 160 close contacts were still under medical observation.

As of Saturday, Hubei had reported a total of 68,135 confirmed COVID-19 cases, with 63,623 cases having been cured and discharged from hospitals. The disease has claimed 4,512 lives in the province. - Xinhua 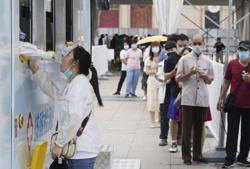