Indonesian doctor Susana Somali smiling with dogs at her rescue shelter in Jakarta. The sprawling complex, home to some 1,400 canines, has become a desperate refuge for at-risk animals during the Covid-19 pandemic, as cash-strapped owners increasingly abandon pets or sell them into the South-East Asian nation's controversial dog meat trade. - AFP

Jakarta, July 11 (AFP): Indonesian doctor Susana Somali and her staff cut tightly-bound plastic ropes off dozens of whimpering dogs rescued from the butcher's block after being sold or abandoned during the coronavirus pandemic.

Somali's sprawling Jakarta complex, home to about 1,400 canines, has become a refuge for at-risk animals as cash-strapped owners sell them into the South-East Asian nation's controversial dog meat trade.

Mostly acting on tip-offs, Somali and her team hit the streets looking for stray dogs and butcher shops where more and more doomed animals are spending their last days howling in cramped cages.

Somali -- who juggles a day job testing Covid-19 samples at a local hospital -- started the shelter in an upscale Jakarta neighbourhood more than a decade ago.

Back then, she rescued one or two dogs from a butcher each week. But that number has soared to as many as 20 in recent months as strays are snatched off the streets for their meat.

The 55-year-old mother of two negotiates with often unfriendly butchers, sometimes paying them cash or supplying other meat to secure the animals' release.

"The real battle isn't rescuing them from butchers, although that is always scary. The challenge is taking care of these dogs during the pandemic," Somali said.

Somali and about 30 staff at Pejaten Animal Shelter are struggling to care for a huge number of animals as donations plunge in the midst of the Covid-19 outbreak.

The money is crucial to help cover upwards of US$29,000 in monthly expenses, including employee salaries and the daily cost of half a tonne of meat for the animals.

She started confronting butchers after seeing a video of a pregnant dog about to be slaughtered.

"Someone posted images of this crying dog on social media and I saw the tears in her eyes," she said.

"That's when I became aware of the butchers."

Somali and her team rescued dozens of puppies bound for a local Korean eatery this month, but they don't always make it in time.

"I tried to reach the area but was told that the dog had already been (killed)," she said of one recent dash to a butcher's shop.

"It was a minute too late."

Animal welfare groups estimate as many as one million dogs are killed annually across Indonesia, with more than 100 restaurants in Jakarta alone serving their meat, according to government figures.

The animals are considered unclean in Islam and rarely kept as pets in Muslim-majority countries.

Indonesia is relatively relaxed by comparison, but working at the shelter can still be tricky for Muslim volunteers like Ria Rosalina.

"Many people have asked me why I take care of dogs but also wear hijab," she said, referring to the religious head-covering worn by many Indonesian women.

"But I don't care. I just tell them that dogs were created by God, just like humans."

The plight of Indonesia's dogs isn't limited to the megacity capital.

Animal welfare organisation Four Paws has warned that thousands of strays in Bali were at risk of starving or being snatched by dog meat traders, as a plunge in tourism hammers the holiday island.

It is also a growing problem in other parts of Southeast Asia as traders prey on owners facing hard economic times, said Katherine Polak, a veterinarian with Four Paws.

"Animals are at a very heightened risk," she said.

"Some low-income people might be tempted to sell their pets."

For years, activists have called on the government to halt Indonesia's dog meat market -- a goal shared by Somali.

"Ending the dog meat trade may sound like a dream but everything starts from a dream," the shelter owner said. 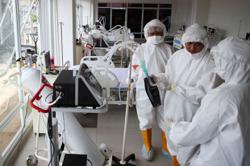