Voters observing social distancing measures while waiting in line to register and vote at the Poi Ching School polling station in Singapore, on Friday (July 10). Singapore headed to the polls as Prime Minister Lee Hsien Loong’s ruling party seeks to extend its 55-year rule with a fresh mandate to counter the city-state’s worst-ever recession amid the coronavirus pandemic. - Bloomberg

SINGAPORE, July 10 (The Straits Times/ ANN): About 2,159,000 voters, or 81 per cent of registered voters, have cast their votes at polling stations in Singapore as of 5pm, the Elections Department (ELD) said.

"We strongly encourage voters to check the queue situation at their assigned polling stations before setting off to vote," the ELD said.

It added that the voting time-bands from 8am to noon are reserved for senior voters aged 65 and above to minimise their interaction with younger voters.

At a polling station in Serangoon Avenue 2 in Marine Parade GRC, Mr Sanguni Muniady, 93, took about 30 minutes to cast his vote. A queue of 20 people had formed when he arrived at 8.05am.

Still, he found the voting process more efficient now, compared to the past.

While queues were seen at some polling stations, voters who turned up early described a fast and smooth voting process earlier in the day.

Cheryl Goh, a 36-year-old bank executive, said the voting process at the Poi Ching School polling station where she voted was smooth, but it could have been faster if the queue was more orderly.

She said: “The queue was snaking around which made it rather cumbersome to move. But even with around 60 people inside, it took me less than 15 minutes to vote.”

Marketing executive June Oh, who also voted at Poi Ching School, said she observed seniors struggling with the self-inking pen. “Some of them tried to use it as a pen, not knowing that it’s a chop,” said the 25-year-old. “But there were officials there to help them.”

The ELD had arranged for measures to ensure the safety of voters amid the coronavirus pandemic.

For example, each voter has a recommended time-band to cast his ballot on polling day, so as to spread out the crowd across polling hours.

To minimise their interaction with younger voters, senior voters aged 65 and above have been assigned time-bands between 8am and 12 noon, said the ELD.

As many as 2.65 million Singaporeans are expected to vote in the general election. They will cast their votes at 1,100 polling stations across the country.

A total of 10 opposition parties and one independent candidate are challenging the ruling People's Action Party in this election, where Singaporeans will pick 93 Members of Parliament.

Seats in all 17 GRCs and 14 SMCs are being contested.

No ballot papers will be issued after polling closes at 8pm.

Special measures were introduced at polling stations to ensure the safety of voters amid the coronavirus pandemic, especially the elderly.

Family members voting at the same polling station may accompany the senior to vote, but only one accompanying family member will be accorded priority voting, along with the senior voter.

Seniors who are unable to vote in the morning time-bands may do so after 12 noon, and will still be placed in a priority queue and given assistance by election officials if needed.

A special voting hour for those who are sick or are serving their stay-home notice at home will take place between 7pm and 8pm.

At polling stations, the temperature of each voter will be recorded. Those with a temperature of 37.5 deg C and above will be turned away, and asked to return during the special voting hour.

Voters are also required to sanitise their hands and to wear gloves before receiving their ballot papers, while the ELD said that polling equipment will be sanitised regularly.

The ELD will first reveal "sample count" results for each of the 17 GRCs and 14 SMCs after polls close.

A hundred ballot papers from each polling station will be randomly chosen by a counting assistant in the presence of the candidates and their counting agents.

The votes will be added up and weighted based on the number of votes cast at each polling station. The sample count for each constituency will be shown as a percentage of the valid votes earned by the candidates.

Sample counts are generally about 95 per cent accurate, plus or minus four percentage points. The first sample count results will probably come from the SMCs where there are fewer voters and could be released from about 10pm. 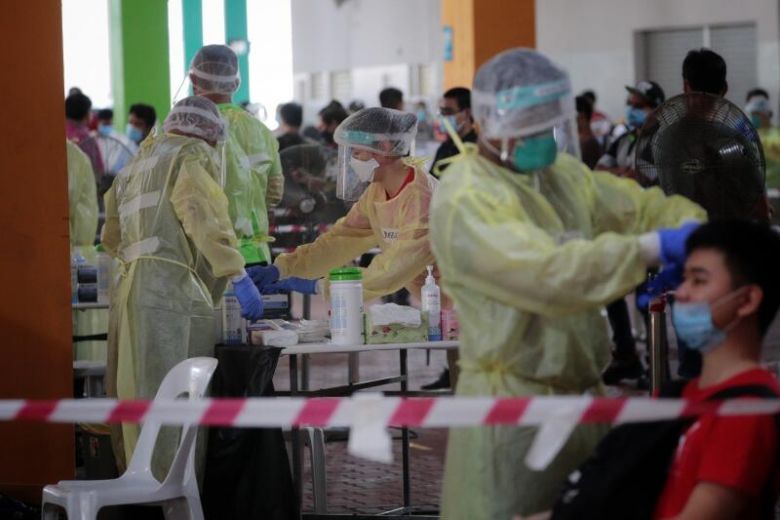 Meanwhile, the health ministry announced that there are 191 new coronavirus cases confirmed as of Friday noon (July 10), taking Singapore's total to 45,613.

They include 16 community cases, comprising seven Singaporeans or permanent residents and nine work pass holders, said the Ministry of Health (MOH) on Friday. Of these 16, eight are close contacts of earlier cases, and had already been placed on quarantine. Epidemiological investigations are ongoing for the other cases.

There is also one imported case who had been placed on stay-home notice (SHN) upon arrival in Singapore.

More details will be announced on Friday night.

The ministry provides the list of locations that Covid-19 patients visited for at least 30 minutes to get those who were at these places to monitor their health closely for two weeks from the date of their visit.

It has said that close contacts would already have been notified and that there is no need to avoid these places as they would have been cleaned if needed.

The ministry also said that a 38-year-old Bangladeshi man died from cardio-respiratory failure on Tuesday, becoming the 14th case of a patient who tested positive for the coronavirus but died from other causes here.

He was taken to Ng Teng Fong General Hospital on June 28 after suffering a seizure, and later developed intracranial haemorrhage. He was confirmed to have Covid-19 on the same day. The preliminary cause of death was cardio-respiratory failure, pending further investigations by the coroner.

With 322 cases discharged on Thursday, 41,631 patients have fully recovered from the disease.

A total of 197 patients remain in hospital, including one in the intensive care unit, while 3,554 are recuperating in community facilities.

Singapore has had 26 deaths from Covid-19 complications.