Philippine President Rodrigo Duterte (left) giving a speech to troopers during his visit to the Edwin Andrews Air Base in Zamboanga City, southern Philippines, on Friday, July 3, 2020. The Philippine president on Friday signed a widely opposed anti-terror law which critics fear could be used against human rights defenders and to muzzle dissent. - AP

Manila, July 4 (AFP): Philippine President Rodrigo Duterte signed a contentious anti-terrorism bill into law Friday (July 3) that critics fear will be used to silence dissent and give the government a new weapon to target opponents.

The legislation, which was approved by Congress last month and has been criticised by rights groups, enables Duterte to appoint a council that could order warrantless arrests of people it deems are terrorists.

It also allows for weeks of detention without charge, which the government argues is necessary to combat long-running communist and Islamist insurgencies.

"The signing of the... law demonstrates our serious commitment to stamp out terrorism, which has long plagued the country and has caused unimaginable grief and horror to many of our people," Duterte's spokesman Harry Roque said.

But activists say the definition of terrorism in the legislation is vague and could strengthen Duterte's campaign against critics. Some are already serving prison sentences or facing jail time after attacking his policies including his drug war that has killed thousands.

"This administration has effectively crafted a new weapon to brand and hound any perceived enemies of the state," he added.

"In the prevailing climate of impunity, a law so vague on the definition of 'terrorism' can only worsen attacks against human rights defenders."

The law defines terrorism as intending to cause death or injury, damage government or private property or use weapons of mass destruction to "spread a message of fear" or intimidate the government.

Suspects could be held up to 24 days without charge, which opponents allege violates a three-day limit set by the Philippine constitution.

Critics allege the legislation also strips away old safeguards, such as penalties against law enforcers for wrongful detention of suspects.

"The law threatens to significantly worsen the human rights situation in the Philippines, which has nosedived since the catastrophic 'war on drugs' began four years ago," Robertson added.

In a report last month, the UN human rights office said at least 8,663 people have been killed in the drug war with "near impunity" for offenders.

Government officials say alarm about the law is overblown, citing provisions that exempt "advocacy, protest, dissent, stoppage of work... not intended to cause death or serious physical harm". 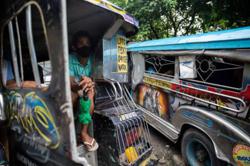 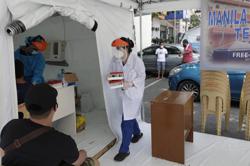 Millions return to lockdown in Philippines as virus cases soar