A flag raising ceremony is held at the Golden Bauhinia Square to mark the anniversary of the Hong Kong handover to China in Hong Kong on July 1, 2020. - AP

The embassy's spokesperson said that with regard to the BNO passport, in memoranda exchanged between the two sides, the British side declared it would not confer the right of abode to Chinese citizens in Hong Kong holding BNO passports.

"If the British side makes unilateral changes to the relevant practice, it will breach its own position and pledges as well as international law and basic norms governing international relations," the spokesperson said.

The spokesperson also urged the British side to view objectively and fairly the national security legislation for Hong Kong, respect China's position and concerns, and refrain from interfering in Hong Kong affairs in any form. 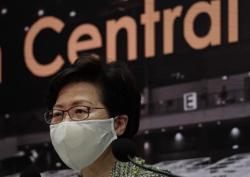