The premier delivered the message joining the world in marking the 33rd International Day Against Drug Abuse and Illicit Trafficking, which fell on June 26.

Drug abuse is a widespread global problem and poses dangers for all humankind. It is the root of crime and hinders socio-economic development, PM Thongloun said.

“Drug abuse causes great harm to the victims and their families,” PM Thongloun said in the message, adding that illicit drug production and trade had become a transnational crime.

Some 269 million people used drugs worldwide in 2018, an increase of 30 percent compared to 2009, according to the latest World Drug Report released on June 25 by the United Nations Office on Drugs and Crime (UNODC).

Cannabis was the most used substance worldwide in 2018, with an estimated 192 million people using it. Drug use increased far more rapidly among developing countries over the 2000-2018 period than in developed countries. Adolescents and young adults account for the largest share of those using drugs, according to the report.

Being aware of the dangers posed by drugs, PM Thongloun said “Our Party and government have attached great importance to preventing and resolving drug issues over past years.”

“We have focused on educating people, especially youths and juniors, to teach them to be aware of the harmful impacts of drugs.”

The government has created favourable conditions and convinced ex-opium farmers in mountainous areas of the northern provinces to grow alternative crops.

A number of drug addicts have been rehabilitated, enabling them to return to their normal lives in society, the prime minister added.

In addition, the government has brought the law to bear on drug traffickers and others complicit in the trade.

Thanks to cooperation from local and external sectors, Lao law enforcers have carried out many successful drug raids and have seized drugs, weapons, and other items, as well as chemicals used in the production of drugs.

Some traffickers and those involved in the illicit abuse and production of drugs have been penalised.

Given that the drug issue remains a threat to national security and social order, Prime Minister Thongloun addressed all sectors of society, saying “Let’s work together to prevent, be against and resolve the drug issue. Reduce it and eliminate it from Lao society.”

In the regional and global context, the Lao government has worked actively and consistently with counterparts in friendly countries, especially neighbouring countries and international organisations, in an attempt to combat drugs, he added.

Representing the government, the prime minister praised and congratulated defence and security officers, all sectors, and the entire population for their participation in the battle against drugs. 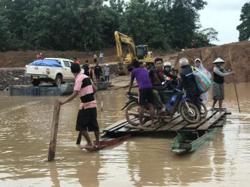 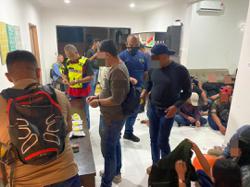