Returning to the streets: Thousands of cyclists take up nearly three lanes of the capital city's thoroughfare, from Senayan in South Jakarta to Thamrin in Central Jakarta. The Jakarta administration resumed its Sunday Car Free Day along Jl. Sudirman and Jl. M.H. Thamrin on June 21, with activities restricted to cycling and outdoor exercises, and street vendors banned from operating. - Jakarta Post/Asian News Network

JAKARTA, June 27 (Jakarta Post/ANN): Jakarta, the first epicentre of the Covid-19 epidemic in Indonesia, has reportedly brought the outbreak “under control”, officials have said, in a statement that has raised eyebrows as new cases still appear in the city.

The capital of Indonesia continues to have more cases than anywhere else in the country with a total of 10,796 confirmed cases as of Friday (June 26), while the number of daily new cases always ranks among the top three provinces.

Home to about 10 million people, the city has logged 1,128,874 and 949 new cases per week for the past three consecutive weeks until June 26, according to data from the national Covid-19 task force.

Jakarta Governor Anies Baswedan said new cases remained low thanks to the double testing that officials had been exercising since early June to shore up negative results. He also claimed Jakarta’s epidemiological statistics, comprising the reproductive rate and positivity rate, were on the decline.

The three are among the city administration’s main considerations for easing restrictions under the so-called “transitional phase” of large-scale social restrictions (PSBB), the governor said.

As of June 21, the Covid-19 reproductive rate in the city was 0.98, according to the city health agency.

The World Health Organisation (WHO) requires a region to have, among other things, a testing capacity of below 0.1 per cent of the population per week and a positivity rate of below 5 percent, before it can begin to reopen the economy.

Jakarta has tested 0.22,0.18 and 0.13 per cent for each week during the three weeks of the transitional PSBB, according to data compiled from the city's official coronavirus website, corona.jakarta.go.id.

The time taken to receive test results had also reduced from more than one week in March to two days as of mid-May, Anies said.

Jakarta has had a positivity rate ranging between 3.3 and 6.2 per cent for the past two weeks, according to data gleaned from the city administration's website.

“Yes, we still have cases. (The pandemic) has yet to end. However, we have those numbers relatively under control when compared to the situation in April, ” Anies told The Post in a recent exclusive interview.

In addition to the metrics, the governor said the capital’s healthcare facilities for treating Covid-19 patients had much improved. The city health agency recorded 4,556 beds and 659 intensive care units last week, an increase from 904 beds and 80 ICUs in March.

Only around 30 to 35 per cent of all the facilities were occupied, Anies said late Thursday at a zikr (Muslim prayer chant) event live-streamed on Youtube.

“The evaluation of (the transitional PSBB) is that our epidemiological numbers show we are under control, health facilities are not overwhelmed and we did not see a jump in the number of patients and [visitors] in public places, ” Anies said last weekend, citing occupancy rates of just 17 percent in shopping malls after reopening.

University of Indonesia (UI) epidemiologist Tri Yunis Miko Wahyono said when it came to public health, the decision to ease restrictions must account for more than just numbers, especially when the daily number of new cases was still high.

"I agree that (the reproductive rate and positivity rate) is about to decline, but it is not safe and under control yet, because it may rise again," Miko said. "Let's redefine what 'under control' means. For instance, new cases must not be above 100 per week – not per day."

He acknowledged that Jakarta had been facing a severe economic contraction, which forced the administration to reopen the economy even though, as a former epicenter, it should have been the last to reopen.

As of Friday, East Java leapfrogged Jakarta to become the new national epicenter of the disease in Indonesia, according to the official daily tally.

With the inevitability of economic repercussions, Miko called on the city to impose health protocols that were stricter than existing efforts and warned against resuming activities that made no direct contribution to the economy.

He noted the resumption of Car Free Day (CFD) on Jl. Sudirman and Jl. M.H. Thamrin on Sunday with a ban for street vendors. More than 40,000 visitors descended on the street that day.

The city administration responded midweek by shifting CFD this weekend to 32 spots for sporting activities across Jakarta in an attempt to reduce crowd numbers.

Jakarta Public Order Agency head Arifin admitted that the public was still lacking in compliance with the order to not gather in large crowds, among other basic health protocols.

Arifin said the agency had been patrolling residential neighborhoods every day over two shifts – morning and afternoon – to remind people to observe health protocols.

The agency has collected Rp 200.92 million (US$14,139) in fines from 1,150 individual violators for not wearing masks during the transition period.

He argued that inconsistent compliance with health protocols was largely due to a lack of knowledge and public awareness, which is why he believes it is important to supervise the efforts rather than merely reminding people.

“Do not be satisfied with the numbers [...] The only way to adapt (to Covid-19) is by instilling a culture of public health (awareness), ” he said.

“It is too early for us to claim success in controlling the disease, unless we are able to educate society and health protocols are fully implemented.” - The Jakarta Post/Asian News Network 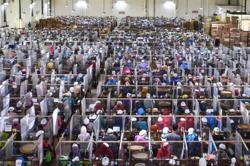 The 'Joker' who turned the Indonesian justice system into a laughing stock: Jakarta Post