Indonesia to start construction of new capital city next year JAKARTA (The Jakarta Post/ANN): Despite the economic downturn caused by the Covid-19 pandemic, the government is slated to begin construction of the new capital city in North Penajam Paser regency, East Kalimantan, as scheduled in 2021.

“We're still in the planning phase. We're currently focusing on the basic design of the new capital city and drafting a capital city relocation bill with the House of Representatives, ” Public Works and Housing Minister Basuki Hadimuljono said on Wednesday (June 24) as quoted by kompas.com.

“We hope next year we can commence construction of the new capital city.”

Basuki explained that the government had cooperated with domestic and foreign investors for the capital city relocation project.

"The government can't work alone [in this project], so it's important to collaborate with private sectors from other countries," he said.

The new capital city, he added, would adopt smart city technology and be eco-friendly.

Basuki said in April that his office was not allocating part of its 2020 budget for preliminary construction work of the new capital.

Coordinating Maritime Affairs and Investment Minister Luhut Pandjaitan separately said that the government was currently not in the position to say whether it would go ahead with the capital relocation project, as it was busy handling the coronavirus outbreak in the country.

The government is scheduled to continue construction of Sepaku Semoi Dam, the main water supply for the new capital city, as planned.

It allocated Rp 676.72 billion from the 2020 annual state budget for construction of the 378-hectare dam and the Public Works and Housing Ministry is currently working on land procurement for it.

The dam is expected to have a capacity of 11.6 million cubic metres with a water debit of 2,400 litres per second.

Besides Sepaku Semoi, the ministry is planning to build three other dams around the new capital city, namely Batu Lepek Dam, Beruas Dam, and Safiak Dam, all three of which will be located in Kutai Kartanegara regency. - The Jakarta Post/Asia News Network 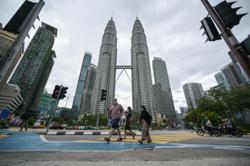