JAKARTA POST (Jakarta Post/ANN): Flag carrier Garuda Indonesia on Friday (June 19) said it is scrapping a plan to replace the use of face masks for its flight attendants after passengers complained they could not tell “whether the cabin crew was smiling or frowning” because half of their face is covered.

Garuda president director Irfan Setiaputra previously announced the airline was considering face shields as an alternative to masks to ensure positive interactions between the cabin crew and travelers.

On Friday, however, Irfan said face shields “will not replace face masks but will complement them instead”.

“We are evaluating the most appropriate and safe PPE (personal protective equipment) to be used by our flight crew while also considering the comfort and freedom of interaction with passengers, ” Irfan said in a statement.

Garuda corporate secretary Mitra Piranti said on Wednesday that cabin crews would still wear masks and gloves during flights while the airline waits for a new safety guideline to be issued.

Other forms of PPE will also be issued for flight attendants, including single-use aprons to be worn when serving in-flight meals, he added.

Garuda’s plan to replace face masks with face shields received backlash from social media users, who slammed both the complaining passengers as well as the airline.

"Passengers who complain should just be shoved out of the plane. Why do cabin crew have to risk their health just for the sake of stupid passengers who want to check out (the attendants)?" @polluxa tweeted on Wednesday.

"How can such a thing become a priority instead of the passengers’ and flight crews’ safety?" posted @athenneee.

While allowing airlines to operate regular flights, the Transportation Ministry’s civil aviation directorate general requires flight attendants to wear masks and gloves for their personal safety, except in cases in which wearing such protective equipment would interfere with their safety duties.

Meanwhile, the Covid-19 cases in Indonesia rose by 1,041 within one day to 43,803, with the death toll adding by 34 to 2,373, Achmad Yurianto, a Health Ministry official, said at a press conference here on Friday.

He also said that 551 more people had been discharged from hospitals, bringing the total number of recovered patients to 17,349.

Yurianto called on the public to obey the implemented health protocols in a bid to avoid more virus infections. - Jakarta Post/Asian News Network 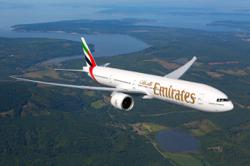 Emirates lays off more pilots, crew in latest round of job cuts 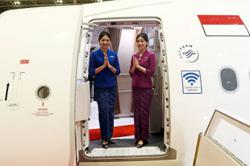 Garuda to drop masks for service with a smile