RAPPLER CEO and executive editor Maria Ressa (pic), who was convicted of cyberlibel alongside former Rappler researcher Reynaldo Santos Jr in a landmark case, says the verdict is a “cautionary tale” to make the press afraid.

“I began as a reporter in 1986 and I have worked (in) so many countries around the world. I’ve been shot at and threatened, but never this kind of death by a thousand cuts, ” Ressa told reporters after the promulgation on Monday.

The cyberlibel case stemmed from a 2012 investigative report written by Santos, which claimed that then Chief Justice Renato Corona while on impeachment trial used vehicles registered under the name of property developer Wilfredo Keng.

Based on an intelligence report, the story – published four months on the website before the Cybercrime Prevention Act was signed into law and updated in 2014 – said Keng had ties with illegal drugs and trafficking.

Ressa’s camp had 15 days to decide on what legal steps to take, said lawyer Theodore Te.

Ressa and various groups said the charge was an attack on press freedom and democracy, and that the outcome would impact future cyberlibel cases.“We should not be voluntarily giving up our rights, we will take this – we will fight, ” said the former CNN Jakarta bureau chief, addressing Filipino journalists.

President Rodrigo Duterte has accused the website, which is critical of his administration, of peddling fake news and being owned by Americans. He has also banned it from covering him in Malacanang.

Keng said the conviction had, to some extent, vindicated his name.

“Even today, when the truth should have set me free, Rappler’s lies still resound after the bang of the gavel has faded away, ” he said. 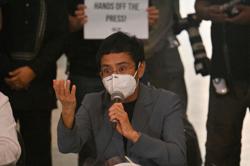