Passengers board a train, usually packed during rush hour, with plastic sheets spacing out seats to ensure social distancing, in Manila on June 1, 2020. - AFP

MANILA (The Straits Times/ANN): Millions of Filipinos living in Metro Manila opted to stay home on Monday (June 1), the first day since the Philippines lifted one of the world's strictest and longest coronavirus lockdowns, as concerns over getting infected by a deadly coronavirus overpowered their desire to go out after being cooped up for three months.

“We’d rather wait for how things on the ground will shape up in the next two to four weeks, ” Jeff Sacramento, country head of tech outsourcing firm Simplus Philippines, told The Straits Times.

Globe Telecom, one of the country’s biggest telcos, advised its non-essential employees at its head office to continue working from home till June 15, according to one staff member.

Sacramento said his company had anticipated a public transport mess on the first day after restrictions were lifted.

Although the government has allowed trains, buses, taxis, ride-sharing services and motorised rickshaws to again hit the road, it has also curtailed their number, and limited their passenger load to just half their capacity.

Over 180,000 jeepneys – repurposed jeeps that service thousands of kilometres of inner and last-minute roads – are still barred from going out.

Commuters waited for buses for long hours on Monday, often unaware they were at non-designated bus stops. The army had to deploy at least eight trucks to ferry thousands who were stranded on the roads.

The Metro Rail Transit, which had over 500,000 passengers a day before the lockdown, again rolled out its trains. But it barred commuters from standing inside trains and covered half the seats with plastic, so that those sitting would be spaced at least a metre apart. That led to long queues at MRT stations.

Sacramento said his company had considered providing shuttle services for its workers, many of whom live in suburbs two hours away from Manila by bus.

Sherryl Acosta, a senior executive at a pharmacy firm, said her company had asked customer service representatives and patient coordinators who had been working from home to return to their offices.

But most rely on public transport, so they stayed home instead.

“Most of them don’t take just one bus to work. They have to ride a tricycle, then a jeepney, then the MRT, ” said Acosta.

Top officials running a task force overseeing efforts to slow the spread of the coronavirus asked the commuting public for patience.

“We are pacing the rollout of public transport, so we ask the public for some understanding. We can’t just open everything up. That will just bring us back to (a lockdown), ” said Interior Secretary Eduardo Ano.

Acosta said many of her company’s employees were also wary they could get Covid-19, the disease the virus causes.

“They are worried that after staying home for three months and being safe, they would suddenly get Covid-19 when they go back to work and spread the virus to their families, ” she said.

Sacramento said he distrusts data from the Health Ministry that show the coronavirus outbreak has been contained. “It’s too low, ” he said.

The Health Ministry on Monday reported 552 cases of Covid-19, bringing the nation’s total to 18,638. But it stressed that only 119 were new and that the rest were old ones that were validated only recently. - The Straits Times/Asia News Network 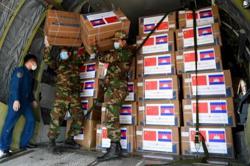 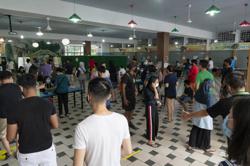