A 'For Rent' sign displayed in the window of a store on Hollywood Road in Hong Kong, China, on Monday, March 16, 2020. Hong Kong businesses hope the security legislation could effectively prevent illegal activities and create a safe and stable business environment. - Bloomberg

HONG KONG (Xinhua): The decision by China's top legislature on the national security legislation for Hong Kong is welcomed and supported by the business community in Hong Kong.

They believe the move is helpful in safeguarding the lawful rights of Hong Kong residents, protecting the investing environment and ensuring long-term prosperity and stability in the city state.

Deputies to the 13th National People's Congress (NPC) attended the closing meeting of its third annual session on Thursday and voted overwhelmingly to approve the NPC Decision on Establishing and Improving the Legal System and Enforcement Mechanisms for the Hong Kong Special Administrative Region (HKSAR) to Safeguard National Security.

"A stable and orderly environment is of critical importance to maintaining Hong Kong's status as an international financial center," it said in a statement on Thursday.

"Escalating violence and vandalism is posing serious threat to our rule of law and the foundation of 'one country, two systems, ' putting our economy and the livelihood of Hong Kong people in grave peril," it said.

"A national security law for Hong Kong will serve to safeguard national security and strengthen the continuation of 'one country, two systems' under which the wellbeing of all our citizens will be guaranteed in a stable and prosperous Hong Kong," said the statement.

The Chinese General Chamber of Commerce (CGCC) of Hong Kong stressed that safeguarding national security is a constitutional responsibility that Hong Kong must fulfill, and that Hong Kong's full cooperation with the national security legislation will be necessary to ensure not only the steady continuation of the "one country, two systems" principle, but also the residents' well-being and long-term prosperity and stability of Hong Kong.

The CGCC said in a statement that it hoped that the HKSAR government could encourage all sectors to cooperate with the enactment of relevant national security laws, enhance publicity, promotion and education on the legislation among the general public, and explain provisions of the legislation in detail.

CGCC Chairman Jonathan Choi Koon-shum said the legislation only targeted four kinds of serious crimes, including subversion, separatism, terrorism and foreign intervention, the regular business operation in Hong Kong would not be affected, and the legislation helps boost confidence of both local and overseas investors.

The Chinese Manufacturers' Association of Hong Kong (CMA) said it was not worried about the impact of the legislation on Hong Kong's existing capitalist and legal systems, the high degree of autonomy as well as the rights and freedom of Hong Kong residents. On the contrary, it said, the legitimate rights and interests of businessmen and investors would be better protected.

CMA President Dennis Ng Wang-pun said it's worrying to see a resurgence of violence as the Covid-19 epidemic situation has eased in Hong Kong, highlighting the urgency of national security legislation.

He hoped the legislation could effectively prevent illegal activities and create a safe and stable business environment.

Peter Woo Kwong-ching, former chairman of The Wharf (Holdings) Limited, said in a statement that the move is expected to lead people's lives and business environment back to normal soon, which is the common aspiration of many Hong Kong residents.

His view was shared by Robert Ng Chee Siong, chairman of Sino Group, who believed that the legislation would better protect the lives and property of the Hong Kong people, public safety, business and investment, as well as the interests of the general public. - 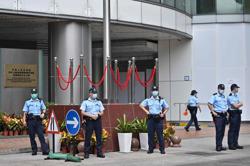