Asean News Headlines as at 10pm on Thursday (Sept 29)

People wade through a flooded market after Typhoon Noru made landfall in Hoi An, Vietnam's Quang Nam Province on Sept 28, 2022. - AFP

* Flight frequency between Malaysia and China to increase to 30 weekly

* Over 520 Filipino migrants deported from Sabah

* Busted: Syndicate who sold RM3mil worth of websites to scammers

* Three children taken to hospital after fire in Sembawang flat

* Singapore to slap fines on smokers at public parks, beaches from Oct 1

* Singapore moves up one spot to be 7th most, innovative economy in the world

* SIA passenger who allegedly made bomb threat an example of drug harms: Minister

* Marching elephants bring vehicles to a halt near Thai sanctuary

* Indonesia to cut dollar reliance with rupiah near two-year low

* Philippines’ Marcos gets US$4bil investment pledges from US

* Foreign tourists help clean up Hoi An after typhoon Noru

* In Myanmar's rebel strongholds, internet can mean life or death

* Cambodia has over 5,000 Buddhist pagodas: official

* Leaders of China, Japan say it is important to develop ties

* Meaning of family needs to be expanded: Korea Herald

* Taiwan to end Covid quarantine for arrivals, welcome back tourists

* Asian stocks pick up after BoE steps in, but pound rally wanes 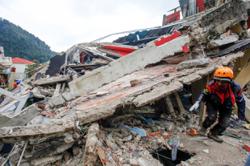