BEIJING (Bloomberg): China warned about the spread of Covid-19 in several parts of the country, as authorities’ quest to continue wiping out the virus saw three makeshift hospitals hastily erected in Tibet, which is seeing its first cases since the start of the pandemic.

The new facilities provide 2,000 beds in the capital, Lhasa, and 1,000 in the city of Shigatse. As part of its ongoing Covid Zero strategy, China mandates that all positive cases and their close contacts be isolated, often in government-built temporary hospitals.

After living most of the pandemic virtually virus-free, Tibet reported 28 new cases for Tuesday (Aug 9) and has imposed a partial lockdown of Lhasa -- including the famed Potala Palace, the traditional winter residence of the Dalai Lamas -- while it mass tests to root out hidden chains of transmission. A team of health experts from Beijing has arrived to support its containment measures.

China’s National Health Commission warned Wednesday that people in high-altitude regions are more prone to chronic respiratory diseases and low blood oxygen levels, putting them at greater risk of serious illness from Covid. An analysis of an outbreak in the mountainous province of Gansu, which had 27 serious cases among its almost 4,500 infections, suggested the topographical link, official Guo Yanhong told reporters at a briefing.

With the onset of the summer vacation season, and its international borders effectively closed, China is grappling with flareups in multiple tourism hotspots, with local officials turning to the Covid Zero playbook of movement restrictions, mass testing and surveillance to try to get the cases under control. The virus is spreading fast in areas including Xinjiang, Inner Mongolia and Guangdong, NHC spokesman Mi Feng said Wednesday. The country’s 952 new infections on Tuesday was the highest tally in almost a month.

In the northwest, Urumqi -- the capital city of Xinjiang and a popular destination for Chinese travelers for its proximity to the Silk Road -- locked down six of its eight major areas for five days, suspending taxi and public transport services.

The region reported 122 Covid cases. More parts of Xinjiang were subject to restrictions, officials said, and tourists will now be able to leave the region if they produce a negative PCR test within 24 hours.

China’s largest outbreak is in Hainan, a tropical island in the south known for its beaches and duty-free shopping, where 570 cases were reported.

Some travellers who had been stranded in Sanya, a popular tourist spot on Hainan’s southern tip, since flights were canceled and restrictions imposed last week were able to leave Tuesday, with more departures expected. Those still there are subject to frequent mass testing and curbs on their movements.

The flareups coincide with a rallying call from a top Communist Party newspaper that officials must avoid becoming "slack” and "war weary” when it comes to fighting the virus.

The article, which acknowledged pandemic controls were having an impact on people’s lives, follows a meeting of the Politburo last month, where the strict Covid Zero policy was reinforced by China’s top leaders.

While other countries that pursued virus elimination such as Singapore and Australia have moved on from the approach, accepting Covid as endemic, China continues to try and snuff out cases, leaving it isolated as the rest of the world lives alongside the virus. 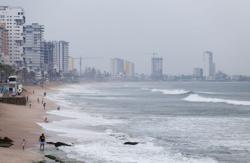