Wendy in for 3m springboard final, and Rio Olympics!

Wendy seen from underwater as she makes an entry into the pool after her 3m springboard dive in the World Aquatics Championships in Kazan, Russia. - Reuters

PETALING JAYA: Wendy Ng would probably be bunking together with Pandelela Rinong in Rio next year.

Wendy (inset) has earned an early Olympic ticket after finishing 11th in the women's 3m springboard individual semi-finals at the World Aquatics Championships in Kazan, Russia. 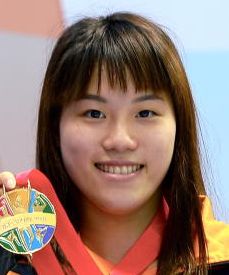 The Kuala Lumpur-born diver finished with 296.10 points to be joint 11th with Ukraine’s Olena Fedorova.

The top 12 divers who have qualified for Saturday’s finals are assured of places in the Rio de Janeiro Olympics next year.

Wendy finished 12th in the preliminaries with 294.60 points to reach the top-18 semi-final stage while team-mate Nur Dhabitah Sabri was eliminated.

The 16-year-old Nur Dhabitah missed the cut after finishing 19th with 276.65 points.

Wendy will be making her second appearance at the Olympics. Her efforts came after Pandelela Rinong had bagged a bronze in the women's 10m platform individual event on Thursday.

Pandelela became the first Malaysian athlete to check into next year’s Rio Olympics after finishing eighth in the top-18 field for the women’s 10m platform semi-finals on Wednesday.

“I thought our chances of winning an Olympic ticket was slim after Cheong Jun Hoong got injured and could not come. But Wendy has proved that she deserves her place in the individual springboard event,” he said.

“She can still do better. Anyway, it's a good attempt from her to qualify for her first World Championships final.”

Ooi Tze Liang and Chew Yiwei will be aiming to earn their Olympic spots when they compete in the men's 10m platform individual, Saturday.