Nineteen-year-old Mohd Irfan Shamsuddin, the discus thrower with a pony tail and a perpetual smile on his face, had no problems retaining the gold with a hurl of 56.62m.

Nauraj Singh Randhawa, feeling the strain of having to defend his title in the men’s high jump event – and having just recovered from a foot injury more than a week ago - can thank his lucky stars for taking home the gold. He was tied at 2.13m with Vietnam’s Dao Van Thuy after both failed to clear the 2.15m height.

The 23-year-old Malaysian was awarded the gold on countback. 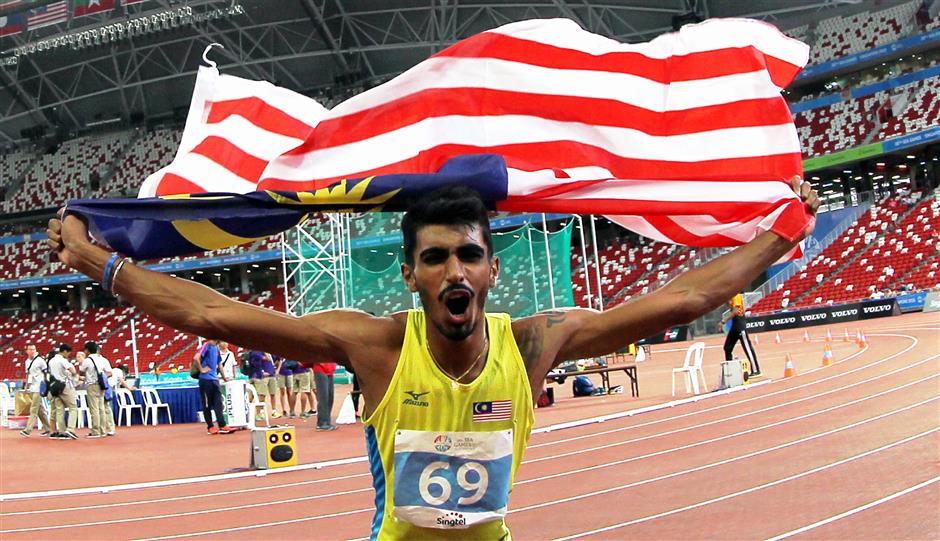 Nauraj was lucky to win the gold after countback.


His effort, however, was way off his personal best of 2.22m done at the Canberra Open in March.

Nauraj was just relieved to have not let the nation down.

“I was feeling the pressure even before the competition because of my foot injury,” said Nauraj.

“But the pressure was on me after I failed to clear 2.15m. The Vietnamese and I were tied at 2.13m and I’m very lucky to retain the gold on countback.”

Debutant Mohd Ashraf Saipu Rahmat did well to win the bronze in the men’s high jump by clearing 2.11m.

Irfan, who holds the national record of 58.04m in men’s discus was far from pleased with his performance too.

“But I only managed 56.62m,” said Irfan, who will be competing in the World University Games in Gwangju from July 3-14.

Malaysia also won one silver and a bronze on the third day of the athletics competition.

Rayzam Shah Wan Sofian finished second for the third consecutive time in the men’s 110m hurdles with a season’s best of 13.97.