The meeting place of the two countries is a division between a "democracy that is growing and a pariah state that would rather starve its people than feed their hopes and dreams", he said.

Pyongyang's continued pursuit of nuclear weapons is "a path that leads only to more isolation", said Obama, as he dismissed the Stalinist state's sabre-rattling.

The North appears to be making preparations for a nuclear test -- its fourth -- despite stringent sanctions imposed by the international community.

"Anybody can make threats. That does not make you strong. Those things don't come through force, they have to be earned." 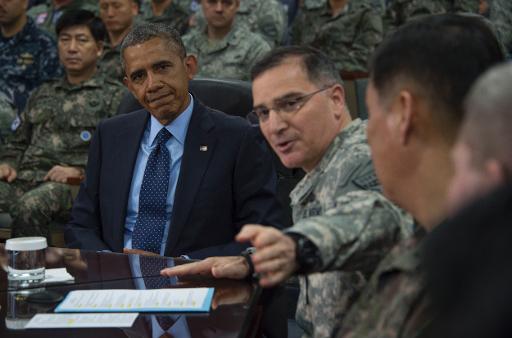 Obama also said the US-South Korean alliance was as "strong as it has ever been".

"We don't hesitate to use our military might to defend our allies and our way of life," he told cheering troops and air force personnel.