Passive existence: The previous approaches of institutionalising and keeping the elderly in nursing homes are isolating them.

A visit to a senior residency in the United States shows that active ageing is possible with some community initiatives.

MANY seniors could age well with some assistance in a senior residency or in a community. Good policies and structures, however, will make help them age better.

Even with his reduced mobility, 83-year-old Peter Fox, for instance, is able to live independently after he moved into a senior residency called North Hill in Massachusetts in September 2013.

“I have made new friends and I am not alone,” says the retired printer.

According to North Hill director of sales Maria Hutchings, only seniors over the age of 65 are accepted into North Hill – they have some residents aged over 100 too. Around 340 residents are living independently there, while 33 require some help and 72 nursing care.

To buy into a plan for the stay, residents can sell off their houses or use their savings. Many start off living independently and can move on to assisted care or nursing care when they need to later. 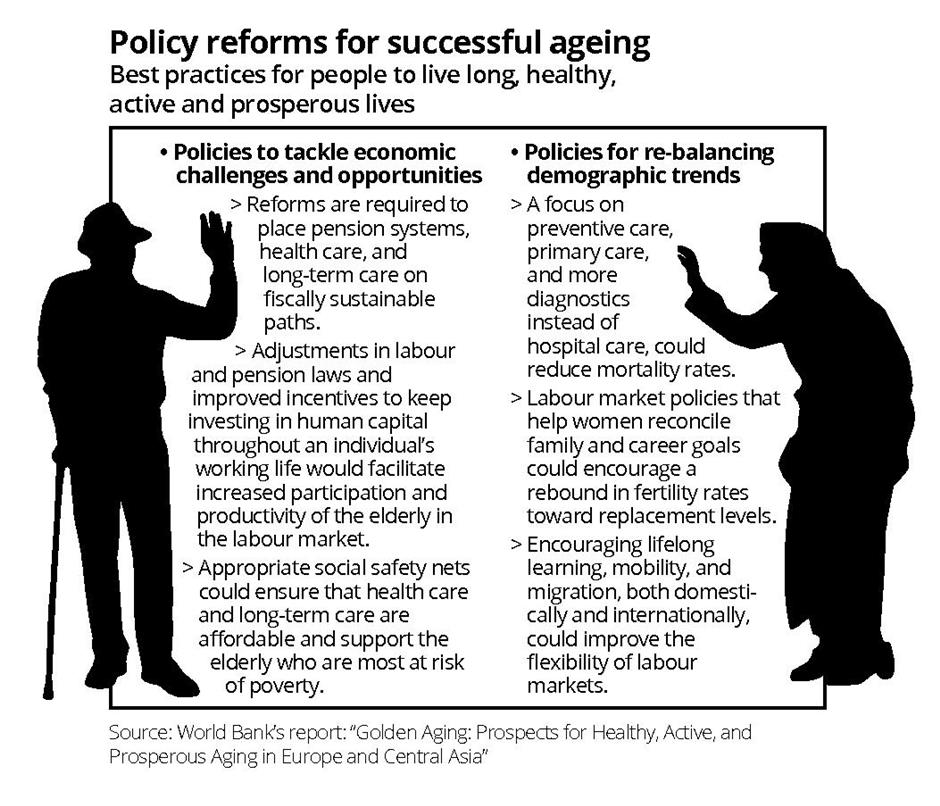 Fox, who is enjoying his “independence”, shares that someone will check on him if he does not open his apartment door by a certain time every morning. He adds that regular health screenings are offered, while he is not short of things to do there as the place has a gymnasium, a swimming pool, a library, gardening room, a pool game room and the occasional band performing.

He can also go out of the residency when he wants to – he often drives to a nearby neighbourhood to attend a current affairs group discussion or dine with friends.

Fox has no major health issues and hopes that he will not need nursing care.

“For that reason, I spend a lot of time at the gymnasium.”

While senior residency is an option for assistance in living independently, the elderly at the Upper West Side of New York City organised themselves as a movement called the Bloomingdale Aging in Place (BAiP).

Aging in Place is a movement that supports the idea that most elders should be allowed to live out their lives in their own homes with only minor changes made.

At BAiP, neighbours volunteer to help older adults to lead vital, connected, safe and comfortable lives as their needs change.

There are also 35 activity groups for members to join – from special interest talks, gatherings, annual parties, exercise, art, reading and writing as well as for visits to the museums or movies.

The neighbourhood has more than 50,000 residents and about 10,000 (20%) of them are aged 62 and above. BAiP has attracted around 1,000 members since it started in 2009, says Hawke, who is also the senior science and strategy officer at Columbia University Mailman School of Public Health’s Columbia Aging Center.

“We have to capacitate families and community partners better, while the state has to work smarter,” says Finkelstein during a three-day seminar titled “Global Ageing: Danger Ahead?” by the Age Boom Academy 2015 in Columbia University recently.

Columbia Aging Center founding director Dr Ursula M. Staudinger concurs. Neighbourhoods need to play a more active role to address this, she says, as the previous approaches of institutionalising and keeping them in the house were isolating the elderly.

Social interaction is important in active ageing, she stresses. “We are very social beings.”

Dr Staudinger says neighbours committing to care for one another’s needs is being practised in the Scandinavian countries.

Countries with rapid development such as Malaysia, India and China can have a foundation to fund an integrated community to care for the elderly.

More than community support, older persons need to be included in the country’s development plans.

Helen R. Hamlin, 92, who has been an advocate and activist for the rights of older people for almost 70 years, says she wants to correct the imbalances in social policies that have left out the needs of the old.

One example is the needs of the aged as stated in the Millennium Development Goals 2000 to 2015, says Hamlin who is also the International Federation on Ageing’s main representative at the United Nations.

“We have not been included (in the country’s social policies) but are only implied. It is as though we do not exist,” she notes, adding that she is also working on ensuring that the new United Nations Sustainable Development Goals will address the needs of older people and the drafting of a UN Convention on the Human Rights of Older Persons.

Hamlin, who is also serving in the executive committee of the UN’s non-governmental committee on ageing, believes there are many people in their 70s and over who are still healthy and wish to work but not all employers are open to it.

Echoing Hamlin, United Nations Population Division in New York population affairs officer Thomas Spoorenberg says it is important for governments to address the needs of their older persons as every country in the world is facing a growing population of the elderly while the average number of children is declining.

“There are 0.9 billion older persons aged 60 and older this year and the number is expected to jump to two billion by 2050.

“The oldest old – those aged 80 and above – is the fastest growing share of the population in the world these days,” he highlights.

World Bank lead economist for Europe and Central Asia Chief Economist Office Maurizio Bussolo, however, believes that a successful policy for ageing societies has to be comprehensive and focus on the whole life cycle.

This includes education, labour markets, retirement incomes support and health, he says, citing the World Bank’s report “Golden Aging: Prospects for Healthy, Active, and Prosperous Aging in Europe and Central Asia” in which he was the lead author.

The report looked at how governments in Europe and Central Asia responded to the challenges posed by their growing number of ageing, including their policy reforms for the elderly to live long, healthy, active and prosperous lives.

As Bussolo puts it, demographic changes should not be seen just as challenges but also opportunities.

For example, with increased longevity, the right incentives could be given to increase workers’ savings, he says.

“Firms in some countries are already adapting by capitalising on skills that appreciate with age. Much will depend on how people, firms, and societies adapt and how policy makers and institutions facilitate their behavioural adjustments.”