‘Mt Kinabalu may have grown shorter’

KOTA KINABALU: Areas around Mount Kinabalu remain active seismically as 100 aftershocks have been recorded since the 5.9 magnitude earthquake on June 5.

A geologist suspects that the quake could have reduced the height of the mountain, which used to be 4,095m.

“The aftershocks can trigger more landslides in the mountain area,” he said.

“The good news is, the aftershocks are weak, as most are well below four magnitude on the Richter Scale, which is unlikely to cause much damage to infrastructure,” said Dr Felix.

“But the bad news is that, we are still in the active seismic phase of the earthquake,” he said yesterday as three tremors, measuring 2.4, 2.4 and 2.5 raised the aftershocks count to 100.

“The current movements indicate that the injured mountain is still trying to settle down.”

He said it was like a huge mushroom of about 3,000 cubic kilometres and its granite legs had been cut, making the mountain unstable.

“It will need time to settle. The current seismic movements made it very difficult to predict and analyse subsequent earthquakes taking place in the areas around Ranau, Kundasang and Tuaran in the mountain’s western end,” he added.

Dr Felix said most of the aftershocks were focused at depths of between 10km and 33km, and breadth of about 20km between the western side and north western area, towards Tuaran.

He said people should not be worried or frightened as most of the aftershocks were mild.

“Tremors like these are quite normal in countries like Japan, Taiwan, the Philippines and Indo­nesia,” Dr Felix said.

“Every year, some 50,000 earthquakes below four on the Richter Scale occur worldwide.” 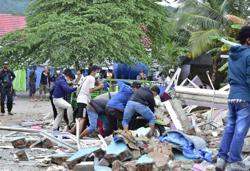