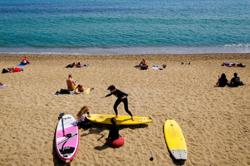 
KUALA LUMPUR: The Government is looking at "quick wins" strategies to address the 8.6 percent drop in tourist arrivals in the first quarter compared to the same period last year.

A Tourism and Culture Ministry statement said the strategies include enhancing collaboration with international airlines; undertaking tactical promotion missions with Malaysian industry activists in certain countries and stepping up promotions through digital marketing.

They also involved organising the Malaysia Educational Seminar for Foreign Media; extending visa exemption for tourists from China and enhancing joint-venture promotions in China by ministries and agencies.

Deputy Prime Minister Tan Sri Muhyiddin Yassin chaired a meeting of the Cabinet Committee on Tourism which, among other things, discussed the strategies on Thursday.

The meeting also studied the feedback from the activities arranged for the Malaysia Year of Festivals 2015.

The statement said Visit Malaysia Year 2014 was a most challenging year for the country's tourism industry because of three air disasters (Malaysia Airlines' MH370, MH17 and AirAsia QZ8501); abductions and security issues in Sabah waters and the massive floods in several states.

Nevertheless, the tourism industry remained resilient and performed well despite the challenges, it said.

The revenue from tourism showed a growth of 10 per cent, to RM72bil last year from RM65.4bil in the previous year, it said.

"According to the UNWTO World Tourism Barometer, Malaysia retained the 13th position in 2014 in terms of international tourism receipts," the statement said.

In terms of international tourist arrivals, Malaysia was on the 12th position in 2014. - Bernama