The remains of of the man after he jumped.

KUALA LUMPUR: A simple fender bender took an unexpected turn when one of the drivers committed suicide moments after the accident.

The incident occurred at Jalan Duta around 11am on Tuesday when one of the drivers, known only as Ong, was on his way to a meeting.

"A man knocked into my car from behind so I got out to check," he said when contacted.

Ong said the man did not get out of the car and instead was trying to drive away but couldn't start his car.

"After a few moments he gave up, got out of his car and gave me his IC and told me to claim insurance," he said.

The man then walked to a nearby MRT construction site and climbed up a scaffolding tower before jumping down.

"I did not expect that at all. But he did look depressed," he said.

"No foul play was involved and police are investigating the case as sudden death," he said.

It said in a statement that initial reports from witnesses at the site revealed that at about 11am, a man, believed to be in his late 30s, was driving a car and was involved in an accident with another vehicle on Jalan Duta outside the MRT work site.

“The MRT Project traffic team assisted by moving the two cars to the side of the road.

“The New Jersey Barriers were moved to enable the cars to not obstruct traffic flow.

“Both drivers then spoke to each other,” the statement read.

The statement added that witness reports claimed that the person then went to one of the MRT piers and climbed up the scaffolding there.

“He subsequently jumped from the scaffolding and died.

MRT Corp and all other parties involved in the MRT Project will provide police with the fullest cooperation for investigations into the case. 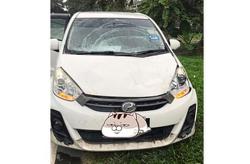 Policeman who cleaned up accident debris praised on social media 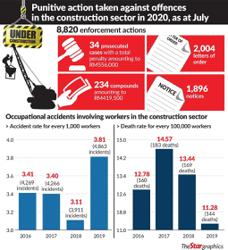