KUALA LUMPUR: Three weeks after the Harmony Street Walk in Penang, a similar visit to various houses of worship has taken place in Brickfields here in another show of support for moderation.

Wong said the walk, which was a follow-up to the first one held along Jalan Masjid Kapitan Keling in Penang, was to emphasise that Malaysians were tolerant people who embraced multi-culturalism.

“We must not let extremists hijack our cause. We must uphold moderation. We hope to organise another walk in Malacca as we are encouraged by the strong support,” he said. 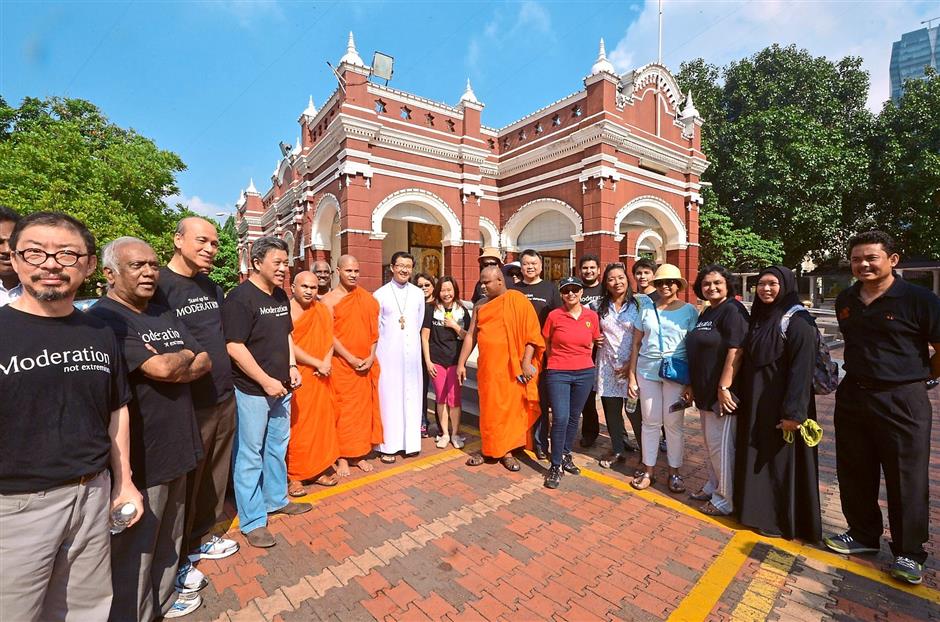 Together as one: The group led by Wong (fourth from left) are seen with Rev Leow (in white robes) and monks in front of the Buddhist Maha Vihara temple in Brickfields.

Lee said there was no place for racial and religious bigots in a multi-racial and multi-religious country.

“Peace and harmony can only be sustained through the practice of the principles of moderation in politics, religion and all spheres of human activity,” he said.

Ramon said the walk showed how united Malaysians could be.

“It is not difficult. It is just that some politicians choose to divide so that they may rule,” he said.

Marina said there were many places like Brickfields where various places of worship were located close to each other.

“We have lived in this kind of environment. What some people are trying to do is to make it seem abnormal and create friction which wasn’t there,” she said.

Ivy, who grew up in Brickfields, said she was proud to take part in the walk.

“I have also seen Brickfields through other people’s eyes and everybody feels that it is amazing to have all these temples and shrines.

“All the divisiveness and polarisation are only happening at the political level but not on the ground. Malaysians are showing what kind of Malaysia we want,” she said.

The walk was organised by The Star and supported by the Global Movement of Moderates and the National Unity and Integration Department under the Prime Minister’s Department.

The little things we can do