Patients can’t get enough of antibiotics

PETALING JAYA: Repeated warnings on the dangers of antibiotic abuse have fallen on deaf ears as private healthcare providers continue to indulge patients who ask for it for every ailment.

Multi-drug resistant organisms have spooked patients worldwide, but in Malaysia, the demand for antibiotics continues to rise.

A recent study showed that many saw antibiotics as a miracle drug, he said.

Quoting another study on upper respiratory tract infections in Selangor, he said a shocking 90% of doctors surveyed revealed that patients expected antibiotics from their general practitioners (see info-graphics).

There are no comprehensive statistics on antibiotics usage in the private sector but Prof Mohamed Azmi believed “that’s where the problem lies”. 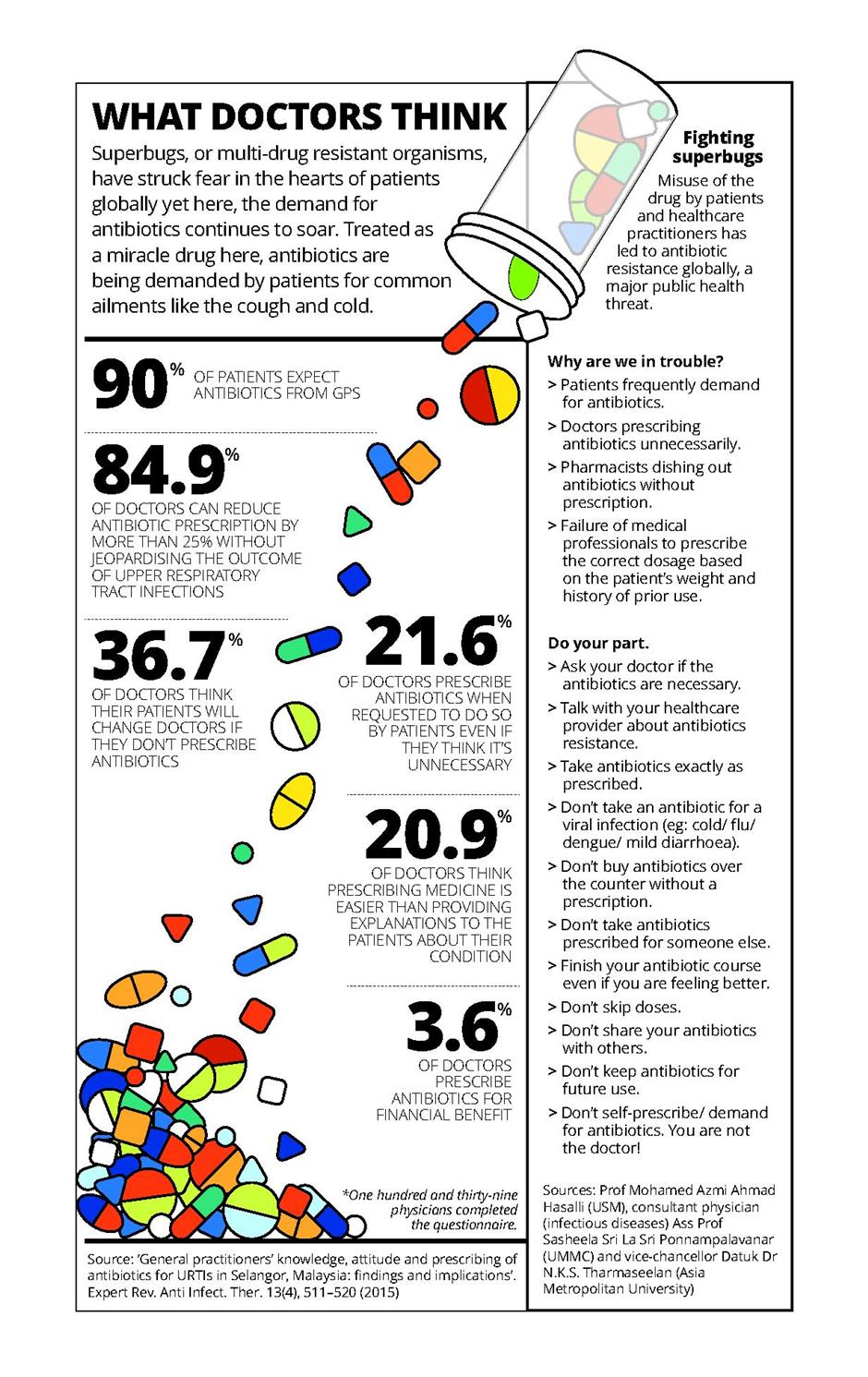 “Antibiotics are becoming less effective in treating bacterial infections due to antibiotic resistance. In the private sector, antibiotics are free for all so they are popping it like paracetamol.”

This results in prolonged illness and hospital stays, costlier treatment and greater risk of death, he said.

By 2050, deaths because of anti-microbial resistance will be the highest in Asia at 4,730,000, a World Health Organisation’s Antimicrobial Resistance 2014 report revealed.

This means the resistance to common bacteria has reached alarming levels in many parts of the world and is largely due to the abuse of antibiotics.

“They treat it like sweets. It is very common for my patients to ask: ‘How come there are so few drugs? Why are antibiotics not included?’

“I never prescribe antibiotics for just-in-case situations or at a patient’s request,” he said, adding that antibiotics could not be sold without a doctor’s prescription.

“Unfortunately, this is what’s happening.”

Pharmacists, traditional and complementary medicine practitioners and patients themselves must also take responsibility for the rise in antibiotic usage, he noted.

But Malaysian patients kept asking for antibiotics as they believed that it would cure them.

“They self-medicate and when they don’t get cured, they go to the doctor demanding for antibiotics.

“In the Seremban hospital, we have stopped using ampicillin (a type of antibiotic) because the resistance level is very high,” he said.

MMA past president Datuk Dr N.K.S. Tharmaseelan said that around the world, organisations were lobbying to eliminate the unnecessary use of antibiotics.

He gave as examples the US Interagency Task Force on Antimicrobial Resistance, a non-governmental organisation campaigning to “keep antibiotics working”, and a very successful “antibiotics are not automatic” campaign by the French government.

In Malaysia, the public, pharmacists and healthcare workers were still not sufficiently addressing the problem, he said, adding that potentially, all existing antibiotics would become “useless” soon as people became more resistant to them.

“This is especially worrying as very few antibiotics were discovered in recent years,” he said.

He said new antibiotics were not necessarily safe yet exorbitantly priced.

“All doctors in both the public and private sectors must be strictly regulated. Some 30% to 50% of antibiotics are inappropriately prescribed by doctors for the common cold, cough, sore throat and gastroenteritis.

“I’ve even seen patients with dengue infection prescribed with antibiotics,” she said.

UMMC recently launched a campaign to increase awareness of antimicrobial resistance and promote judicious antibiotic use among clinicians in the hospital, she said.

“Currently, deaths due to antibiotic resistance are estimated at 700,000 yearly. We are facing a bleak future.

“By 2050, 300 million people will die from this if we don’t act now. The most affected countries will be the developing countries in Asia, including Malaysia.

“If doctors and patients do not use antibiotics responsibly, we will all suffer the consequences,” she said.

Last December, Health Minister Datuk Seri Dr S. Subramaniam warned that the liberal use of antibiotics had resulted in an increasing number of bacteria and pathogens becoming resistant to the drug.

He said antibiotic resistance had been identified as a major public health threat globally, especially when treating infectious diseases.

The love affair with antibiotics