Lending an ear: EPF staff attending to questions from customers at the service counter at the EPF headquarters in Kuala Lumpur.

PETALING JAYA: Keep your propo­sals, just show us our money at 55. That seems to be the opinion of an overwhelming majority of The Star readers who were polled on the four choices proposed by the Employee Provident Fund (EPF).

The majority of them responded to the two options in the first proposal – either to gradually raise the withdrawal age to 60 or to allow one withdrawal at 55 and then to lock in contributions until the age of 60.

The 200 or so Malaysians who responded to the two-day poll wanted a third option – to refuse both the options and just stick to the way things are now.

Tony M. Yong, on Facebook, told the fund it had no right to make such decisions.

“Who are you to decide when we can withdraw our money? You are just custodians. So don’t decide for us, okay?” he said.

Currently, contributors can make a partial EPF withdrawal at 50 and a full withdrawal of their savings upon retirement at 55.

“We are not interested in your options. Leave it at 55,” said Ranjeet Kaur Sandhu.

Napsiah Wan Salleh said withdrawal at 60 would be too long a wait.

“The person may die waiting and gets nothing. If the Government has no money to pay its share of the caruman (contribution), then it is too bad lah,” she added. 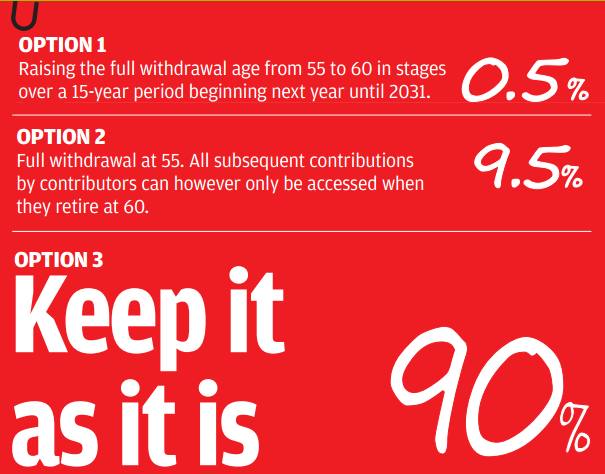 Another reader, Kow Elainee, said EPF should let the rightful owners decide how to manage their own money.

“Please, I truly need it. Don’t mess up and change all rules and regulations. Please, EPF,” she said.

To Mclare Ling, it was not right for EPF to make contributors “beg for our own money” in the first place.

While some wanted to spend their hard-earned money on a well-deserved holiday, a few others voiced different plans for the pension lump sum.

“Definitely 55! So I can keep it in Tabung Haji and ASB!” said Asmah Mohd Zam.

Nick Teh said it should be kept at 55 as many had plans of their own for their money.

“It is against our agreed understanding as per the first day of our contributions, which was the full withdrawal at age 55.

“Therefore, any change is similar to a breach of contract (illegal?),” he added.

Sithaletchemy Krishnaiyer asked the fund to listen to the people.

“We are the contributors, it’s our money.

“If so worried about us, then why don’t you instead orga­nise money management and wealth planning courses?”

Oh Kean Aik took a 1Malaysia approach to the problem by sta­ting his answer in various local languages.

Samuel Lai was among the 9.5% who supported the first proposal’s second option, as contributors still get to withdraw everything they have at the age of 55 before their savings are locked in for another five years.

“Another five years, exact same scenario, if still under employment,” he added.

Another advocate, Ridzuan Abd Rahman, said he and his wife had their own financial planning in place beyond the age of 55.

Many ridiculed EPF’s third proposal, which would pay dividends to members who chose to keep their money with the fund until they reach the age of 100.

“How many of us will live till 100? Even if we are still alive, at this age, what will we use the money for? Cannot walk properly, no teeth to enjoy good food,” said Sally Ng.

Some even came up with alternative proposals, such as Abu Yazeed who suggested flexible withdrawals from ages 45 through 55 as most contributors are well-versed in managing their own finances.

“And for everyone’s sakes, extending it to 60 is a terrible and stupid move,” he cautioned.

Information on the proposals and options are available at the myEPF website at www.kwsp.gov.my.