SUNGAI BULOH: A notorious Klang gangster was stabbed to death by three men during a brawl outside a restaurant in Teluk Panglima Garang.

The 35-year-old, who went by the name “Asli Guna”, was said to be having a drink with a Sri Lankan friend at a restaurant in Jalan Pandan 2 when the men drove up at about 3am on Wednesday.

The three men, who were carrying parang, had an argument with Asli Guna and his friend before they started fighting in the middle of the street.

Kuala Langat OCPD Supt Azman Abdul Razak said the men allegedly stabbed Asli Guna and the foreigner before they sped away in a black Proton Iswara.

“We received a distress call from the restaurant owner. When our officers arrived, we found the Sri Lankan man only lightly injured.

“The other victim, however, was rushed by his friends to the Sentosa Medical Centre before he was pronounced dead at about 5am,” he said.

A police source said Asli Guna was a notorious gang leader and that his killing occurred due to a drug dispute with the three suspects.

“We have recorded a statement from the Sri Lankan victim, who is recovering at the Banting Hospital. We have identified the suspects and are tracking them down,” Supt Azman said. 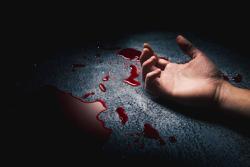