Lending an ear: Muhyiddin and Pahang Mentri Besar Datuk Seri Adnan Yaakob (second from right) consoling a flood victim during their visit to a relief centre at Sukpa Complex in Kuantan. — Bernama

PETALING JAYA: A heroic rescue and relief effort to help flood victims in seven states was ramped up further as the number of evacuees in one of Malaysia’s worst flooding incidents passed the 100,000 mark.

More resources including helicopters and boats have been mobilised, with the Armed Forces setting up a 24-hour flood aid collection centre at the Subang Air Force base. The Reserve Army has been deployed to help send supplies of fresh water to victims in Pahang and Terengganu.

The worsening floods showed no signs of abating with heavy rain in Kelantan yesterday.

Kelantan, where the floods have been the worst in 30 years, recorded 45,467 victims seeking shelter at evacuation centres.

Rescue efforts were hampered in some cases due to fast-rising waters, strong currents and roads to affected locations that continued to be cut off.

Keretapi Tanah Melayu Berhad said a total of 300 bridge tracks, 10 train stations and 19 coaches were submerged in flood waters of up to 10 feet high.

Despite the difficulties, there were many stories in every state of heroic rescue efforts.

In Lipis, Pahang, Fire and Rescue Department personnel hoisted on their shoulders an elderly man who could not walk, while another team in Kuala Krai rescued a woman who had just given birth by carrying her and her newborn twin babies on a stretcher to safety.

“I admit that the situation is challenging to the rescue workers and we are trying our best to make sure that the food arrives to the victims depending on the flood situation,” Muhyiddin said in Kota Baru after being briefed on the situation in the state.

In addition to a special RM50mil allocation by the Government to help the victims, public bodies including the Agriculture and Agro-Based Industries Ministry has allocated RM362,000 worth of food aid for those affected.

Malaysians from all walks of life are coming forward to help with cash and donations of supplies, supplementing efforts by various non-governmental organisations and corporate bodies.

The Star, on its part, has joined hands with the Malaysian Red Crescent Society and Firefly to collect donations for victims of the floods and to fly the supplies to relief centres in the affected states. 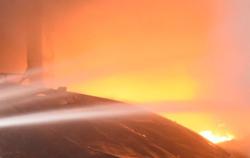