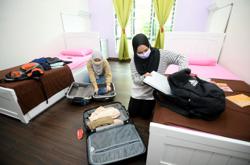 Ameera delivering a speech at another debate tournament in Singapore.

Ameera, 21, and her team-mate from IIUM, Sara Rahim, 19, were the highest ranked team in the tournament, also known as The Norton Rose Fulbright Cambridge Women's Open, after accumulating the most speaker points in all four preliminary rounds.

However, IIUM bowed out in the four-way semi-finals knock-out round against Trinity College Dublin and two teams from Oxford University.

The ranking is just another cap in Ameera's impressive international debate resume. Ameera is also a two-time English as a Second Language (ESL) winner of the Australasian Intervarsity Debating Championship, the champion and overall best speaker of the Asian English Olympics Debate Tournament 2014, and an ESL semi-finalist of the prestigious World Universities Debating Championship 2014 held in India.

"I feel great. I definitely was not expecting (the ranking) as I knew the competition was tough! Yet at the same time, I feel satisfied because being one of the only Asian teams there and to dispel the myth that women can't talk about sports or international relations, was an experience I'll never forget," Ameera told The Star Online. "During the tournament, my team-mate Sarah and I were practically jumping when the motion 'This House Believes that the US and Iran should form alliances to fight against the Islamic State', was revealed as we had done extensive research on the issue.

When asked to share her most memorable experience during the competition, Ameera said: “To come out of that debate ranking first with our opponents, including Oxford, congratulating us and saying that it was very well deserved, meant so much. To know that even your opponents are happy for you, that's something that words can't describe."

After graduation, Ameera looks forward to working closely with non-governmental organisations (NGOs) in helping with the plight of women and children.

“It’s important for women to use debate as a platform to break down existing stereotypes. Especially where women’s and girls’ rights are undermined, debate can be used as the most effective tool for changing mindsets and questioning patriarchal attitudes at politics, work and at home," added Sarah, a second year IIUM economics student from Afghanistan.

The competition, which was held in Cambridge University, United Kingdom, on Nov 23, saw 51 all-women teams from across the world taking part.

Although most participants debated under the banners of their universities and tertiary institutions, the competition was also open to composite teams made up from several institutions.

The tournament was held to encourage participation from women in the debating scene and to raise awareness of women's issues. 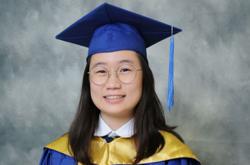