KUALA LUMPUR: Two men shot dead by police in the vicinity of a shophouse in Penampang Baru, Sabah Thursday evening are suspected to be members of the Sulu Rebel Army and the "driving force" behind the recruitment of new members.

Initial police investigations revealed that the duo, in their 30s and 50s, had arrived from Kota Kinabalu and attempted an armed robbery in the area.

In the 5pm incident, a police team intercepted a vehicle in which the two men were travelling. At that juncture, the duo tried to resist and the police were forced to open fire, killing them on the spot.

According to a police source, police surveillance on the two men about a few weeks ago had revealed that they tried to recruit new members, spread the so-called Sulu Sultanate ideology in Sabah, as well as preached elements of violence.

"The suspects, who came from Kota Kinabalu, were also attempting to commit an armed robbery in the area.

"The police are now tracking down the remnants of this group and they are also believed to be getting active off the east coast of Sabah," he said when contacted.

In February last year, the country was stunned when armed Sulu rebels from southern Philippines intruded into Lahad Datu and Semporna in Sabah's east coast, which saw 10 members of the national security forces killed.

However, through a joint army and police operation, dubbed Operasi Daulat, the rebels were routed. More than 100 rebels were killed and hundreds of their followers captured in the state.

Meanwhile in Penampang, residents panicked when they heard gunshots in the business district of Penampang Baru.

A man in his 30s, who declined to be identified, said he was busy at work in a food store when he heard a loud thud.

"I rushed out of the shop and saw a group of armed men wearing ski-masks and firing shots in the direction of some occupants in a four-wheel drive vehicle," he said.

The food store employee, who was hiding in the vicinity, said he also spotted a group of policemen arriving at the scene about 15 minutes later and inspecting the bodies of two men who were earlier, gunned down in the vehicle.

He said he also saw the police take the bodies away in two black plastic bags.

A survey found that the police had cordoned off two business blocks to prevent the public from entering the area. – Bernama 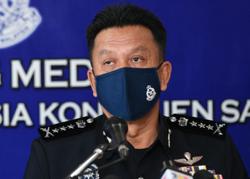