EXCLUSIVE: DAP's Syefura Othman, better known as Rara, is not cowed by the criticism she has received for joining the party.

KUALA LUMPUR: It was by accident that Young Syefura Othman (yes, that is her real name but more about that later) - better known as Rara was thrust into the political limelight.

She had sent an application form to join DAP to Segambut MP Lim Lip Eng, who then tweeted a group picture of them.

This was in July, just two days before Ramadhan.

The rest they say is history. The picture went viral on social networking sites with the DAP news organ Roketkini labelling her “awek cun” in a report.

“I am not really comfortable about that because I think it’s a bit sexist. I will however try and take it positively,” the demure and soft- spoken lass told the Star Online in an interview.

“I didn’t want to make a big deal about joining DAP,” she said on her instant fame.

But even before joining DAP, Syefura’s pictures had been widely circulated during the Bersih 3.0 demonstrations in Kuala Lumpur two years ago, earning her the nickname of “Puteri Bersih.”

So why did Syefura join DAP?

“I joined DAP because it leans on equality for all. The party accepts anyone regardless of their race or religion,” she said.

Syefura added that she also wanted to try something new and wanted to take the opportunity to make friends from other races.

Her decision initially did not go down well among many people who labelled her “Pengkhianat Bangsa” (traitor to her race) among other things, something that Teluk Intan by-election candidate Dyana Sofya has experienced as well.

Some accused Syefura of wanting to remove bumiputra rights and there are those who said she was anti-Malay.

Syefura’s younger brother who is an Umno member was angry with her for two days while her relationship with her best friend has deteriorated.

Ikatan Muslimin Malaysia (ISMA) and a number of other organisations blasted her for joining DAP but Syefura brushed off their comments by saying that it was her right to do so.

“There are racist people everywhere and from every race. Those who accuse other of being racist should take a look at themselves first,” she said.

“How can DAP be racist when they accept anyone regardless of their race?

They are attempting to make the party more Malaysian. In any case, no one forced me to join the party. I did it on my own will,” she added.

Being the only girl of seven siblings, she has learnt to become tough and independent.

“I am used to going everywhere, even outstation on my own by bus,” said Syefura who is sixth in the family.

For the interview with The Star Online Syefura took two hours to get to Kuala Lumpur as she took public transport from her house in Puncak Alam.

She was born in Lumut, Perak and her father “modified” the common Yong name given to Perakians to Young.

“He wanted to give the Yong name an English touch,” she said with a laugh.

Syefura is no stranger to politics, as her her mother is active in the PAS grassroots. She said her mother would actively campaign during elections and that she also attended the recent annual Muktamar in Johor.

Her mother supported Syefura’s decision to join DAP, saying that it was her choice to do so.

Syefura said she has political ambitions, although she would leave it to the party to decide if she was capable enough.

“It sounds like a cliché but I am going into politics because I want to help people and the society. I would like to voice out the problems faced by communities,” she said.

Syefura is very much an activist- volunteering with Dapur Jalanan, being active in Solidariti Anak Muda Malaysia (SAMM) and involved in making documentaries with a club in Bangsar.

In recent weeks, she participated in DAP’s “Impian Malaysia” programme at the Kampung Orang Asal Tual in Kuala Lipis Pahang where they built toilets for the village.

This was the first time that Syefura experienced life in an Orang Asli village. She called it a good and different experience.

“The villagers were very accommodating and friendly. We managed to learn a lot from one another,” she said.

Syefura does all this activities while balancing with her own business of alternative medicine.

This includes bekam (cupping therapy), acupuncture and sauna among other things.

Syefura who worked six months as a nurse even took a course in acupuncture.

“All of these treatments are good and complement one another,” said Syefura who works based on appointments to balance life with politics and activism.

With DAP, she is currently involved in "project Redah" a fortnightly programme on Ubah tv that touches on social and political issues in the country.

Her schedule is packed, but Syefura prefers to be occupied than being idle.

“I really like to be busy instead of just resting or watching television. There is so much one can achieve,” she said. 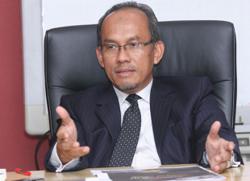