Face to face with Ukraine conflict

DONETSK: We landed in this town fearing the worst. We had been told of the incessant fighting, the unrest and the fierce battles that rage here.

How true those words of warning were.

As we arrived at the Donetsk train station after a four-hour journey across eastern Ukraine, gunshots rang out. Civilians ran helter-skelter, looking for cover.

When we arrived here, we came face to face with the escalating conflict, a matter which will likely make it more difficult for investigators to access the MH17 crash site. The Ukraine army had started a new offensive against the pro-Russian rebels.

Soon after the train came to a stop at the Donetsk station, soldiers from the Donetsk People’s Republic ran to escort us and other passengers to a nearby underground tunnel.

More than a hundred civilians were there, cowering by the walls as sporadic gunfire was heard outside. 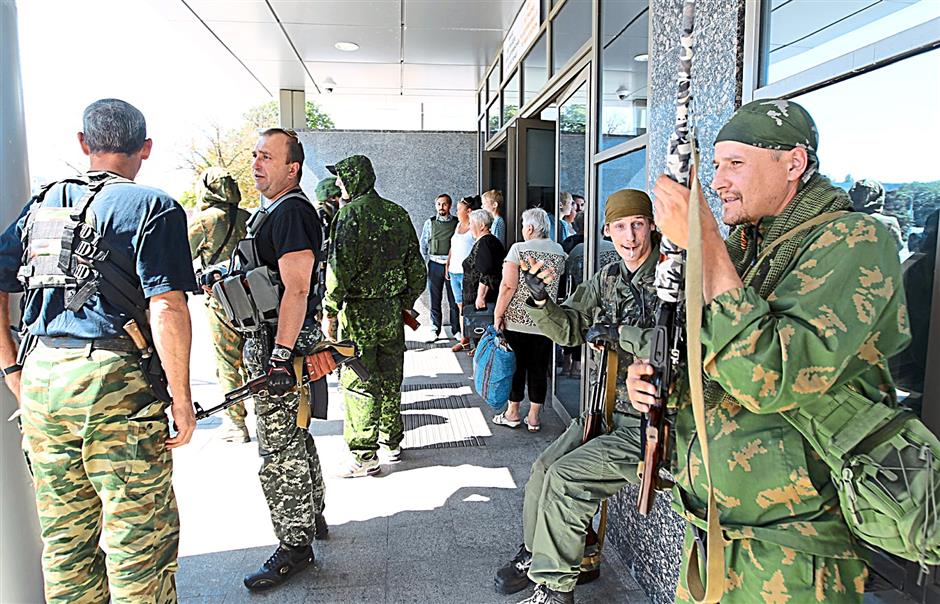 Lockdown: DPR soldiers standing guard as railway passengers wait at an underground tunnel in the Donetsk train station for the gunfire outside to subside.

DPR soldiers stood nearby and shouted at the civilians to stay calm while snipers checked buildings for any sign of armed personnel.

We saw no sign of other armed men, which locals here later claimed were from the Ukrainian army.

The DPR soldiers then organised buses to come for the civilians, shouting for women and children to make their way up the steps first.

As the first groups of people rushed to the buses, gunfire rang out again, causing many to run back towards the underground tunnel.

There, they waited as more DPR troops arrived to secure the area.

The gunfire subsided for a while, and more buses arrived at the train station many minutes later.

We made a run for them, hopping into one of the buses that would later take us to the city centre and to our hotel. We were dropped off at an intersection, and watched as DPR soldiers riding on tanks and armoured personnel carriers sped towards the fight.

It was a different feel from Dnepropetrovsk, the nearest city with an international airport to Donetsk, about 300km away.

There, within official Ukrainian territory, things appeared to be a lot more peaceful, with none of the fighting that was going on around here.

People in Dnepropetrovsk, however, did not seem to have the same sentiments as their Donetsk brethren.

A taxi driver whom we met in the city seemed to speak only two words that we could understand: “Putin” and “terrorist” when we mentioned Donetsk to him.

The first he spoke with a spitting sound, a feeling that seemed to be shared by many in the city. 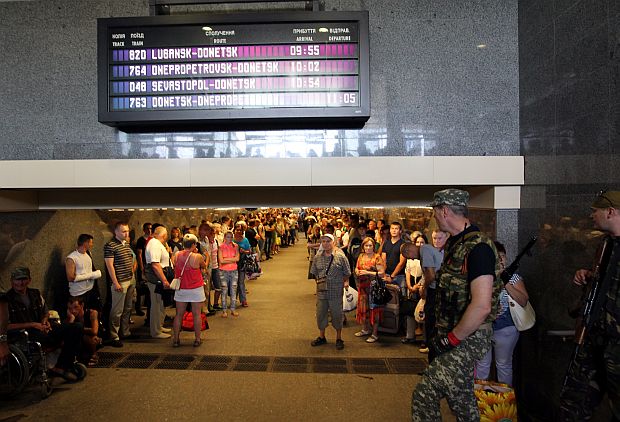 Taking cover: Ukrainians hiding at an underground tunnel at the Donetsk railway station as a gunbattle, purportedly between soldiers of the Ukrainian Army and the pro-Russian militants, erupts outside.

We now have to make our way to the site where Malaysia Airlines Flight MH17 crashed near a small town called Grabovo on July 17.

To do that, we have to travel deep within Ukraine’s Donbass region, a territory contested between the Ukrainian army and several rebel groups.

Before leaving Dnepropetrovsk, we met Syrian student Raed, who had been studying in Ukraine for about five years. He talked about the disputed area.

It is truly a tale of two regions, with MH17 caught unfortunately in between, and the much-needed investigators still too far away to safely inspect what led to its end.