A screengrab of a hostage lying face down on the ground moments before being beheaded by a gunman.

He is one of the gunmen responsible for the beheading of seven factory workers in Jolo, Southern Philippines in 2007, as discovered in an online video.

The 14-minute video clip, recorded by Alhabsi himself, sees a group of gunmen leading the hostages to different spots in the jungle where the brutal act is carried out.

Alhabsi can be heard reciting Quranic verses as the first hostage is made to lie face down before his head is pulled back by one of the gunmen and severed with what appears to be an army knife.

A combo picture of Alhabsi.

The next hostage is then led a few hundred metres away and meets a similar fate, much to the enjoyment of Alhabsi, who is heard giggling and chanting ‘Allahuakbar’ (God is great).

The recording depicts the killing of each worker in gory detail, and at one point, Alhabsi even zooms in on a severed head while making a celebratory comment.

Later, he very briefly turns the camera to himself, and the face is clearly visible to be that of the man identified by Philippines and Malaysian intelligence forces as the rising leader in the Abu Sayyaf terror group.

Towards the end of the video, the gunmen approach the remaining hostage and are seen tying his hands behind his back while asking him several questions.

They then lead him into the jungle, but his fate is unknown, as the recording ends abruptly.

The video clip, titled Seven innocent people in Jolo, Sulu beheaded by Abu Sayyaf group was uploaded on YouTube by a Raymond Penny in July last year, and has garnered more than 5,000 views to date.

The workers, who were employed at a nearby plywood factory, were apparently abducted and beheaded after the company refused to pay extortion money to Abu Sayyaf for carrying out logging in the area.

Alhabsi, then only a junior member of the terror group, has since risen in the ranks after making millions of pesos in ransom money from the spate of kidnappings in the east coast of Sabah.

You can view the video here - http://www.youtube.com/watch?v=8SyxEBDYX0I. However, please be warned that it contains extremely graphic scenes of beheading. Viewer discretion is advised. 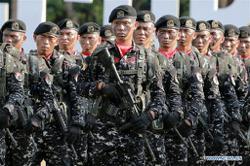 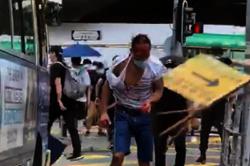