Snapshot: The Kyrgios family - (from left) father George, Norlaila, Nick, brother Christos and sister Halimah - at the 2013 Newcombe Medal ceremony in Melbourne, Australia, when Nick received the Junior Athlete Of The Year award.

“Nick is very close to his Malaysian family, whom he has visited many times. He even played tennis at Cameron Highlands the last time we were in Malaysia!” his mother Norlaila Kyrgios, who was born in Gombak, told The Star.

Although Norlaila, 54, has lived in Canberra for over 30 years, she still says that she is “going home” whenever she travels to Malaysia to visit her family.

“The entire Kyrgios family is very close to my family. I want Malaysians to take pride in Nick’s achievements as Malaysian blood runs through his veins,” said Norlaila, who is delighted to hear Malaysians abroad strike up a conversation in Malay.

On Tuesday, Kyrgios had pulled off a stunning four-set victory over World No 1 Rafael Nadal during the Wimbledon Championship in London.

On reports that the 19-year-old giant killer had been angered by Norlaila’s doubts about his chances against Nadal, she said she believed in her child but thought that it was a long shot.

“A lot of people would have a bit of doubt. A 144th ranked teen taking on the World No 1 – no way I thought that he would give Nadal a spanking.

“He probably did it just to prove his mum wrong. I’m happy that he did. I’m truly surprised,” she laughed.

Kyrgios’ advance to the Wimbledon semifinals was halted by Canadian player Milos Raonic on Wednesday but perhaps his favourite dish of daging masak cili (beef fried with belacan, shallots and garlic) can serve as comfort food.

The former Australian Open junior champion has also been drafted into the International Premier Tennis League’s Sing­apore team, with the championship set to launch in November.

As Kyrgios gets homesick if he is separated from his family for too long, a colour-coded roster has been drawn up to determine who accompanies him for different tournaments.

“We all work and arrange our lives around Nick while still maintaining our identities,” said Norlaila of their close-knit family.

And just like local tennis fans who want to catch the ace in action in Malaysia, the Kyrgios family hopes that he will be included in the Malaysian Open tennis championship in September.

“I’d love to go home and watch it with my cousins who live in Shah Alam.

“We tried for a wildcard entry last year but didn’t get one. Hopefully, it’ll be different this time,” she added. 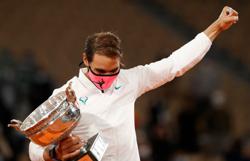