Anti-terror swoop Counter-terrorism officers preparing to storm the house in Sandakan where the suspects were hiding yesterday.

PETALING JAYA: A Royal Malaysian Navy officer is among three men arrested in Sabah for being part of a militant group planning to undertake suicide bombings and attack missions in Syria and Iraq.

They are linked to rebel groups called the Islamic State of Iraq and Sham (ISIS) in the Middle East and the notorious Al-Qaeda-linked Abu Sayyaf in southern Philippines.

With the latest arrests by the Counter-Terrorism Unit, 15 members of the group have been detained since April 28 in various parts of the country.

Deputy Inspector-General of Police Tan Sri Mohd Bakri Zinin said the three men aged 29, 30 and 31 were detained in a special operation at a house in Sandakan in the east coast of Sabah yesterday.

“We believe one of the suspects, aged 30, is a senior leader in the local militant group.

“Investigations reveal that the suspect had undergone training at a camp belonging to the Abu Sayyaf in southern Philippines,” he said. Mohd Bakri said the suspect sneaked back into Sabah on June 11 and hid in a house in Sandakan.

“The Navy officer, who was based in Sandakan, is believed to have harboured the suspect along with another man.

“All three are being detained under the Security Offences (Special Measures) Act (Sosma),” he said.

According to sources, the militants were trained in southern Philippines, had slipped into Sabah and were planning to fly to Syria and Iraq, where the ISIS militant group is carrying out attacks to topple the existing regime.

The sources said the militant group’s game plan was to go to Syria and launch attacks before heading to Iraq for their “end game”. 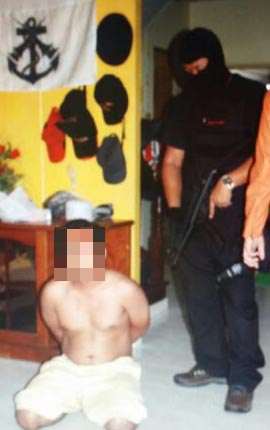 An officer standing guard over one of the suspects after the raid.

“After the attacks, they were planning to launch suicide bombings in Iraq,” the sources said.

They said the 31-year-old Navy officer had helped smuggle in the senior leader from southern Philippines into Sabah on June 11 and also harboured him at a safe house in Sandakan.

“It is alarming that a Navy officer, who knew the suspect was wanted by the police, willingly aided the militant,” said a source.

The source said the 29-year-old suspect, who is the brother of the senior leader, ran a logistics transport company in Sabah.

“Both brothers are pretty much into the same ideology,” he added. The sources said they believed that other members of the militant group were still being trained in Abu Sayyaf strongholds in Jolo and Basilan.

They said that although 15 militants had been arrested so far, no weapon had been discovered.

The sources said the Counter Terrorism Division was keeping a close watch along the borders of Sabah and other entry points in the country to ensure remnants of the militant group do not make use of Malaysia as a springboard for attacks in the Middle East.

“We don’t condone such activity. This is a police case and we will let them investigate. We will take action after the investigation is completed,” he said.