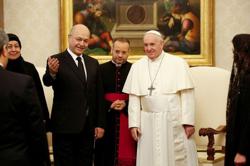 PETALING JAYA: Just a year ago, Ahmad Tarmimi Maliki was a quiet 26-year-old factory worker. Now, he has the dubious honour of being Malaysia’s first suicide bomber linked to the Islamic State of Iraq and Sham (ISIS).

He is credited with blowing up 25 elite Iraqi soldiers at Iraq’s SWAT headquarters in al-Anbar on May 26.

Reports state that Ahmad Tarmimi, who received militant training in Port Dickson at the end of last year, drove a military SUV filled with tonnes of explosives into the SWAT headquarters, blowing himself up in the process.

The bombing preceded an attack on the headquarters by ISIS commandos.

His exploits were published in the ISIS official website with the title, “Mujahidin Malaysia Syahid Dalam Operasi Martyrdom” with his photograph also featured.

The report also stated that the ISIS militants had seized a large weapon cache from the headquarters. It described Ahmad Tarmimi as the first Malaysian suicide bomber in Iraq.

Ahmad Tarmimi’s family members said their last meeting was in March before he left for the Middle East to further his Islamic studies.

He had been working in a factory in Selangor since 2012. While he did not act strangely, Ahmad Tarmimi had become more pious and more secretive, said his family.

From Facebook postings, it is learnt that Ahmad Tarmimi first went to Syria via Turkey before finally ending up in Iraq, where he turned suicide bomber.

Sources said the ISIS network had local links in South-East Asia, including Indonesia, and many youngsters were being lured to fight the war and die for their Muslim brothers in the Middle East.

ISIS was formed in April 2013 and grew out of al-Qaeda in Iraq.

According to Terrorism Research and Analysis Consortium (http://www.­trackingterrorism.org), ISIS has extensive financial resources (mostly derived from alleged organised crime activities in areas of control as well as diaspora funds and unidentified financial sponsors from within Gulf states) as well as human capital that enable operations in various locations. This is seen in attacks executed in areas regarded as primarily Shi’a areas in Iraq, such as Najaf, Karbala, Kut and Wasit as well as bombings in Baghdad (Iraq).

ISIS has since become one of the main forces to launch attacks against government forces in Syria and Iraq.

Reports revealed that the final “S” in the acronym ISIS stems from the Arabic word “al-Sham”.

This can mean the Levant, Syria or even Damascus but in the context of the global jihad, it refers to the Levant, an area that now consists of Cyprus, Israel, Jordan, Lebanon, Syria, Palestine and part of southern Turkey.

The organisation is led by Abu Bakr al-Baghdadi. Little is known about him, but it is believed he was born in Samarra, north of Baghdad, in 1971 and joined the insurgency that erupted in Iraq soon after the 2003 US-led invasion.