Speed slower than Vietnam and Cambodia

An Internet user cheking out the country's ranking on Net Index.

PETALING JAYA: Malaysians may be one of the most globally-connected people but it’s not necessarily at a speed they want.

According to a new global survey, the average broadband speed in Malaysia is slower than Vietnam and Cambodia in the region, and barely ahead of Myanmar.

Almost three times slower than Vietnam, Malaysia at 5.48 Megabits per second (Mbps) was ranked a low 126 out of 192 countries surveyed from May 2013 to April this year in the recent Net Index.

The survey was conducted by Ookla – a global broadband testing and web-based network diagnostic applications company that compares the download, upload and line quality of broadband connections.

Commenting on the survey results, Federation of Malaysian Manu­facturers (FMM)’s ICT and multimedia committee chairman Dr Neoh Vee Heng said its 2,678 members were generally concerned about the country’s slow Internet speed, the unavailability of wireless and fibre connections, and the high cost of connectivity.

“One member who is investing in a big project in Sepang is very worried about the slow 1Mbps broadband speed in that area.

“More and more FMM members are becoming heavily dependent on the Internet for their global business communications and transactions. Unfortunately, connectivity in Ma­­laysia is slow and costly compared with our neighbouring countries,” he said, adding that it was important for businesses to have fast Internet connectivity at a reasonable cost. 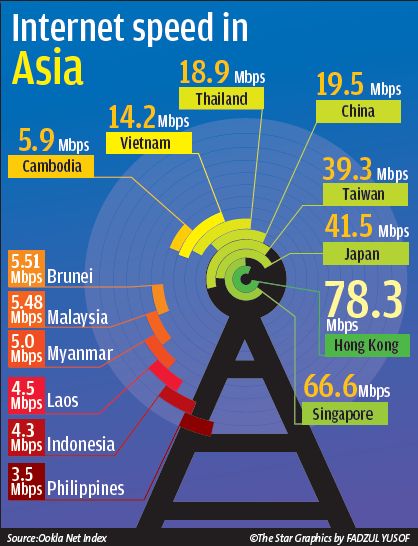 The FMM would meet with the Malaysian Communication and Multimedia Commission (MCMC) to discuss how broadband services could be improved and its cost reduced, he said.

He urged the MCMC to act on telco companies that did not keep their promises because of a clause that says “the speed is not guaranteed due of various factors”.

“It is the telcos’ responsibility to ensure that all the necessary infrastructure is in place before they go around promising speedy Internet connectivity,” he said.

Symantec Malaysia systems engineering director Nigel Tan said the Government had announced an allocation of RM1.8bil under Budget 2014 for the second phase of the High-Speed Broadband (HSBB) project to increase the speed and extend the access areas in the urban, suburban and rural areas.

“This is a key initiative in making access to information easier as the nation moves into an information-driven economy.

“The need for speed correlates with how a huge part of our lives are conducted online – from sending e-mails and e-banking to watching videos and video-chatting.

He, however, warned that the grass may not be greener on the other side as cybercriminals tend to target computers that were connected to high-speed broadband Internet.