PETALING JAYA: The daughter of MH370's Capt Zaharie Ahmad Shah has said she will not forgive British tabloid the Daily Mail for "making up stories" that implied her father could be responsible for the missing Malaysia Airlines flight MH370.

In a Facebook posting, Aishah Zaharie said the tabloid should consider making movies since they were so good at making up stories and scripts out of thin air.

"May God have mercy on your souls. You can bet your a** I will not forgive you," she said in her post.

The tabloid quoted a "source close to the pilot's family" saying that the pilot of the missing flight was in emotional turmoil over the break-up of his marriage. 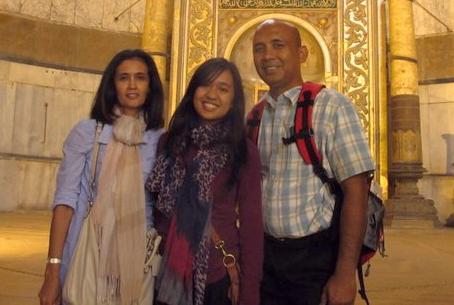 The report on Sunday alleged that Zaharie's wife, Faizah Khanum Mustafa Khan. told investigators that Zaharie had stopped speaking to her in the weeks before the flight on March 8, and spent time alone in his room with his flight simulator.

The British tabloid had also quoted Aishah as saying that she barely recognised the man who used to dote on her.

"He wasn't the father I knew. He seemed disturbed and lost in a world of his own," she is quoted to have said.

Dr Mohd Ghouse Noor, a schoomate of Zaharie said that the tabloid was spreading lies and that their report was slanderous.

Dr Ghouse, moderator of the "Friends of Captain Zaharie MH370" Facebook page said he had spoken to a very close member of Zaharie's family, including Zaharie's son, who has strongly condemned the report.

"It's a total lie, where do they get this story from? That's not true at all. I call upon all of you to rally together in solidarity to strongly condemn this kind of reporting, we must oppose strongly to this kind of nonsense.

"They cannot come out in the open to refute, they are not able to surface ... Could you imagine the nightmare that this irresponsible people are causing them?" he said in a Facebook post.

When contacted, Dr Ghouse said that the photos used in the tabloid were not of Capt Zaharie's family or his wife.

"There isn't a photo of his wife. It's actually Zaharie's niece's family and nothing to do with Faezah," he said.

Meanwhile, Bukit Aman has reminded the media to stop publishing unsubstantiated news, and to respect the feelings of families of passengers on board the missing Malaysia Airlines flight MH370.

"We appeal to the media to be sensitive to the plight of the family who is going through a very difficult time. Please have compassion and understand that such news are hurting the family tremendously," said Bukit Aman assistant chief of the Inspector-General of Police secretariat Asst Comm Datin Asmawati Ahmad.

ACP Asmawati reminded the media that they had a social responsibility to steadfastly uphold, which included the effect irresponsible reporting would have.