The tragic deaths at a rave concert last week have yet again highlighted the drug abuse problem in our midst.

YOU can almost hear the anger rumbling on the social media networks after news broke out that an upcoming electronic dance concert, “Life in Colour”, was cancelled.

Its promoters explained that this was due to the death of six young revellers, suspected of synthetic drug overdose, at the Future Music Festival Asia (FMFA) last week.

But as one unhappy raver above points out, cancelling the event will not stop young people from taking and dying from drugs.

Sadly, he is right.

Malaysia has had a party drug problem for years. And as the UN Office on Drugs and Crime (UNODC) warned last November, the problem is growing (see chart).

Aggravating the problem is that users have no way of knowing if what they are getting is real.

According to the Chemistry Department, since 2000, Ecstasy pills that traditionally used to contain up to 40% of its active ingredient MDMA are now being infused with high doses of the more dangerous ketamine (an animal anaesthetic) and methamphetamine. This does not include the possible adulterants like rat poison and other chemicals not fit for human consumption.

It is easy to blame an event for attracting drug pushers and users but it is only a symptom of the actual disease afflicting society, says Sepang International Circuit Sdn Bhd chief executive officer Datuk Razlan Razali.

“What is alarming is that it takes these kinds of concerts to see how many of our young people are using drugs or are susceptible to drug abuse.

“Before we had these kinds of dance parties, young people were abusing drugs at parties elsewhere. These big events only congregate them in one place, and when six people die, it is too glaring to ignore. For all we know, one young person has been dying every other day taking party drugs somewhere else.”

Razlan believes this is something that the police and other anti-drug enforcement agencies need to address instead of putting the blame solely on music events and concerts.

“The question is, are you closing one eye and sweeping everything under the carpet?”

He urges the police to use these events to try and catch the drug pushers, not wait until something bad happens.

“Use the information from your intelligence or undercover. This is what many drug enforcement authorities do overseas.”

In fact, in the United States, the police are being criticised of “entrapment” where plain-clothes officers pretend to be junkies and concert-goers looking for a high.

“You need to question the authorities: How did the alleged foreigners manage to get the drugs into the country, let alone the concert? How did they get through our security checks at the borders?”

A big problem, says criminologist Assoc Prof Dr P. Sundramoorthy of Universiti Sains Malaysia, is that the drug business is big money. “The authorities are working hard but the ‘business’ is so lucrative that you can’t stop the market. You catch one drug trafficker or pusher, there will be many waiting to take his place.”

‘Let the dogs out’

The guidelines of the Central Agency for Application for Filming and Performance by Foreign Artists (Puspal) state that organisers of any performances in public and open areas need to obtain a police permit from the district police headquarters concerned.

It is up to the police unit in question to assess the security measures needed and decide how many people they want to deploy to guard the safety of the event, be it a public assembly, concert or a funfair, Razlan points out.

“I think it’s time we make police deployment to concerts compulsory, especially if the size of the event is big and if the duration is long. We also need to have the canine units present to sniff out the drugs and issue a stern warning to the drug pushers and those thinking of indulging in drugs. We can also have random drug tests at the concerts.”

Nevertheless, he concedes that it is the concert promoters’ responsibility to ensure the safety of the concert-goers. “If you think you need extra security, ask for it.”

This is what he and his team have planned for their annual Formula 1 Petronas Malaysia Grand Prix after-race concerts at the Sepang International Circuit Helipad next week. The “Sepang Comes Alive” event will also see a rave with the internationally acclaimed DJ Calvin Harris spinning.

“We are going to put as much deterrent as possible to stop drug pushers from crashing our party. We will have our regular security measures such as bag checking and body searching but we have also insisted for canine units to be there all the time, so that they will be constantly visible, not just at the entry points.

“We will have AADK (National Anti-Drugs Agency) posters and banners to remind people about the dangers of drugs, as well as get our volunteers to walk around in T-shirts with anti-drug messages.”

Razlan is confident that the concert will be drug-free, keeping in mind that most of the F1 crowd is “different”, he says.

“The F1 event will be more wholesome. And the party is only one and a half hours, not 12 hours for three days.”

The scale of the FMFA – some 80,000 bought tickets for the three-day, 3pm-to-3am festival – did make it difficult but this is the third time Livescape Asia has organised it.

More importantly, this year they had put in place the best possible safety measures for festival-goers, stresses Iqbal Ameer, one of Livescape Asia’s directors.

“We put significant planning and resources in place and our planning for events conforms to our Operations Order Manual which is of international standard and applies throughout major festivals across the globe. Approvals are only given by all the relevant parties if we adhere to these standards.”

Igbal says they had beefed up security to curb admission of illegal substances into the festival. “However, the regulatory search routine that is permissible only allows bag searches and pat-downs which were conducted at the entrances to the festival.”

And contrary to common belief, police presence was strong, he adds.

“The police had two mobile police stations set up at each of the entrances to the festival (one on each of the two entrances). Three police beat bases were also set up around key areas inside the festival grounds and there were 100 police officers on patrol focusing on drug detection, crowd control, and traffic and perimeter control. We also had 280 security staff who were deployed at the event and 80 Rela members on the ground as well as extensive medical facilities on site.”

Iqbal feels the crucial issue that urgently needs to be addressed is the larger drug issue in the country.

“There have been a lot of questions asked in recent days, but one question that hasn’t been addressed is, ‘Why are people taking drugs?’ I think we and society as a whole need to address this.”

He believes there needs to be more education on this issue.

“Why is drug education such a taboo subject in this country? At the end of the day, drug usage is a personal choice – we DON’T condone it – but people need to know the repercussions of abusing drugs.” 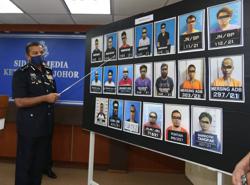 DG: Most cases asymptomatic or mild
Anwar demands that Muhyiddin step down as PM
King: I didn’t consent to revocation
Confusion in the House following royal rebuke
PMO: Muhyiddin is carrying out his duties based on the Constitution
Govt is intact with 110 MPs, ministers urge Muhyiddin not to resign
MPs become legal eagles over Emergency Proclamation expiry
RM3.9bil for vaccine buy
MP: Why were contract doctors queried by cops?
Bersatu stands by Muhyiddin, says Deputy President