Number of countries in SAR operations increases to 26

SEPANG: The number of countries involved in the search and rescue operations for Malaysia Airlines Flight MH370 has increased from 14 to 26, said the Transport Ministry. 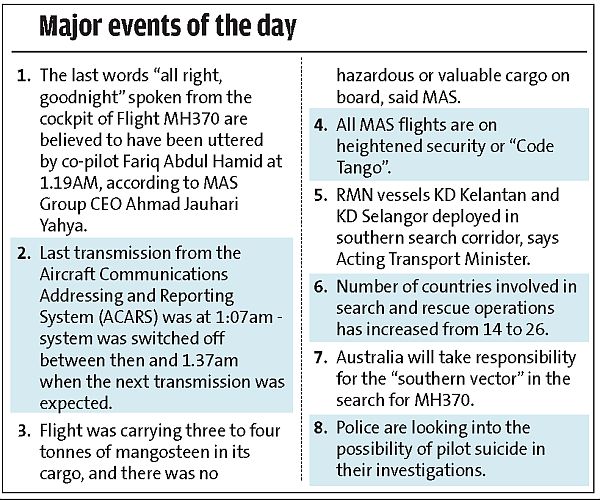 The assistance included radar and satellite information; land, sea and aerial search operations; search-and-rescue action plans for relevant authorities as well as details of any information required by Malaysia.

The statement also said that three French officials from the Bureau d’Enquêtes et d’Analyses pour la sécurité de l’aviation civile (BEA) had arrived in Kuala Lumpur. The officials would share their expertise and knowledge based on their experience in searching for Air France Flight 447.

The ministry also said that on March 8, the police had started investigations into all crew members on board MH370, including the pilot and co-pilot, as well as all ground staff handling the aircraft.

On March 9, police officers visited the homes of the pilot and co-pilot and spoke to their family members.

The ministry added that police visited the homes of the pilot and co-pilot again on March 15 and removed the pilot’s flight simulator from his house with his family’s assistance, and re-assembled it at the police headquarters.