KOTA KINABALU: Wildlife researchers are hoping to learn how Sabah’s crocodile population is coping with an ever-changing habitat with the help of a 4m long reptile, one of the largest to be captured.

“This information is of great importance in a region where substantial portions of historic nesting grounds have already been converted for agricultural use,” said Dr Benoit Goossens, the Danau Girang Field Centre (DGFC) director.

He said Zalim was captured and tagged with a satellite tracking unit in the Lower Kinabatangan Wildlife Sanctuary (LKWS) on Feb 6 as part of joint effort between the DGFC and the Sabah Wildlife Department (SWD).

“We are seeking to understand the role of this apex predator within a degraded habitat,” said Goossens, adding that seven seven crocodiles, five males and two females, had been tagged as part of the project.

“In addition to the satellite unit, a small tissue sample was also taken to examine the genetic health of the crocodile population in the region,” he said.

Meanwhile, SWD rangers have set traps along Sungai Petagas near the city to capture several crocodiles spotted by villagers over the past several days.

He said a fourth crocodile is believed to have been killed by a boat’s propeller. 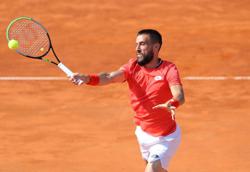 Back on favoured clay, Thiem wary of New York hangover