BEIJING: The khutbah at the Niujie Mosque here was delivered in Mandarin, but that did not deter Malaysian Muslim students from congregating there on Hari Raya Haji.

After all, they could understand its content in general as they are students of the Teaching Chinese as a Second Language programme.

“The khutbah touched on the willingness of Prophet Ibrahim to sacrifice his son, Prophet Ismail, when commanded by Allah,” said Muhamad Rahimi Rajab, 22, who studies at the Beijing Foreign Studies University (BFSU). 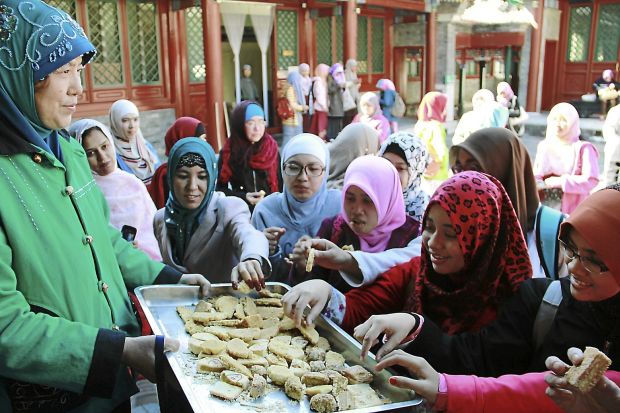 Very much at home: Worshippers, including Malaysian students, being treated to pastries after performing the Aidiladha prayers at the Niujie Mosque in Beijing, China.

This is the fifth year he has been observing Hari Raya Haji at the mosque.

Muhamad Rahimi said performing prayers at Niujie Mosque was a unique experience as he got an insight into a different culture.

His meal for the day consisted of chicken rice and corn porridge, which he himself prepared after buying groceries from a nearby market that sells halal products.

As for Balqis Zamri, Ain Athirah Mohd Hafiz and Syairah Safiee, who are coursemates at the Beijing Language and Culture University, they sat at the female prayer hall of the mosque.

While Syairah said she was sad to be away from her family on Hari Raya Haji, they all agreed that it was an eye-opener to observe the celebration in a mosque in China.

Niujie Mosque, which stands out with its traditional Chinese architectural influence, is the biggest and oldest mosque in Beijing.

Ros Anita Romzi, 21, said about 60 Malaysian BFSU students went to the mosque together.

“We were invited to dine at a halal restaurant near our university,” she said. “It serves free food during festivals.”