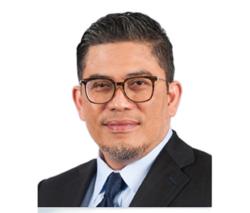 PETALING JAYA: Not many know it, but national laureate A. Samad Said has the most distinguished looking beard and moustache by chance.

It occurred back in the 1980s when he was admitted to the hospital.

“The doctor advised to do nothing but just rest. After two or three weeks I looked at myself in the mirror and saw a different me. I came to like it and from that day adopted the look,” he told the Star Online in an interview at a coffee shop in Bangsar.

When asked about the maintenance of his beard, he laughed before saying he shampoos it once a week.

With his notable look, Pak Samad as he is fondly known has a celebrity-like status wherever he goes. People want to take pictures with him or shake his hand.

“I live around here so people recognise me,” said Samad who is often seen around the Bangsar LRT station.

When asked what he would like to drink, Samad dressed in all white declined, as he is fasting.

In fact he fasts every alternate day following the practice of prophet Daud. He has been following this for the past three to four years now.

“Most of my life, I have been fasting but I only used to fast three days a month. Now with old age, I am closer to the grave and closer to the next world. I have to be more holy,” says the 81-year-old who was awarded the Sasterawan Negara title in 1986 for contributions to literary heritage.

He is in the National Mosque every Tuesday and Thursday and on Fridays he is usually at the KLCC mosque. A lot of his time is spent on prayer and reading the Quran.

“I want to be in the mosque when I die,” says Samad who was born in Malacca.

Religion and old age keeps Samad going on in his quest for a better Malaysia. While he has always been known for his literary work, he is now seen as a face of activism, especially for his work with Bersih. He has been a co-chairperson of the coalition since 2011.

“What’s happening disturbs me and makes me sad. I was just a poet and an observer all the while. I wasn’t in the midst of things.

I look back and see that I could have done more. I should have done it from the beginning. I was with people like Ahmad Boestaman before. The pen is not enough. I think now money is mightier than the sword,” he says in reference to government handouts.

Samad is unhappy with the state of the economy and claims that the government is irresponsible in it’s handling of finances. He also bemoans the recent price hike in fuel.

“It’s not true to say it doesn’t hurt the people on the streets. Some goods have increased in price,” he says.

Samad says he is affected by increasing prices as he doesn’t have a specific income.

“People think I am a national laureate and I get paid but I don’t. It’s just a title, which has become a burden now,” he says.

Malay rights groups Perkasa and Gabungan Pelajar Melayu Semenanjung  (GPMS) had called for his literary title to be stripped for allegedly being involved in a gathering where the Sang Saka Malaya flag was flown.

“I’m a religious person. Worldly titles don’t mean anything to me, although I respect the title because the people gave it to me,” he says.

He also rejects suggestions that Bersih is using him because of his public persona.

Datuk S. Ambiga recalls the Bersih 2.0 rally in July 2011 when Pak Samad was together with her in the tunnel when they were tear-gassed. In the ensuing melee he lost his slippers, but still walked all the way to the palace.

“Pak Samad has a lot of endearing qualities not least of which are his principled stand on issues, integrity, courage and humility. He never threw his title of Sasterwan Negara around. He never did anything for personal gain in his time in Bersih,” she says.

There are certainly no airs about Samad who speaks his mind and believes that everybody should be treated equally.

He does not like it when most politicians use race, religion and even the Malay language to gain mileage. He is also against the witch-hunt against the communists.

“If you’re a communist, you’re bad. That’s not always the case because Chin Peng was a hero for fighting the Japanese during the emergency. The British gave him a big medal. Later he fought the British because they are colonists. You can’t say he’s a terrorist. He’s a freedom fighter and should be allowed home,” said Samad interestingly just a few days before Chin Peng passed away.

Samad added that the likes of Rashid Maidin, Abdullah CD and Mat Indera all fought for freedom and were not traitors.

“The people in power now are all enjoying the fruits of freedom, also due to the efforts of these people,” he said.

One thing that Samad has always championed is the Malay language. He has written 72 books and numerous numbers of essays and poems Salina, Cinta Fansuri and Hujan Pagi are among his more notable novels.

When asked why he didn’t write anything in English, Samad said he wanted to enrich the Malay language through literature.

“I choose to write in Malay, but it doesn’t mean others should write in Malay. Others can write in Tamil or Chinese. The most important thing is the content,” says Samad whose favourite authors include Russian Alexander Solzhenitsyn and Indonesian Pramoedya Ananta Toer.

Samad still journals his thoughts in a diary every day and tweets short poems on what’s happenings in the country. He has almost 125,000 followers on the social networking platform.

Besides literature, Samad is also a movie buff. His favourite movie of all time is the 1950s classic 12 Angry Men because of the intense discussions that takes place among members of the jury over a murder case.

He watches movies in all languages in the cinemas. One of the movies he watched recently was the Hindi film Chennai Express. He also watched the controversial Tanda Putera.

“It’s Tandus (barren) Putera for me as I’m concerned. The movie is not healthy and doesn’t help. Art should help instead of destroying,” he says.