KUALA LUMPUR: Stolen handphones will be rendered unusable within three hours of the owners reporting the devices missing. And even changing the SIM cards will not reactivate them.

The system, to be introduced before the end of the year, is part of a government crime-prevention initiative to reduce phone thefts.

A telecommunications industry source said that industry regulator, the Malaysian Communications and Multimedia Commission (MCMC), issued a directive to telcos in April to comply with the new requirements for this initiative.

MCMC chairman Datuk Mohamed Sharil Tarmizi said the system was to reduce street crime and handphone thefts since stolen smartphones can be sold at half the retail price in the black market.

“Yes, we are doing this. Many countries like the United States, Australia and Britain already have such a system in place. We got the consumers’ backing,” he said. 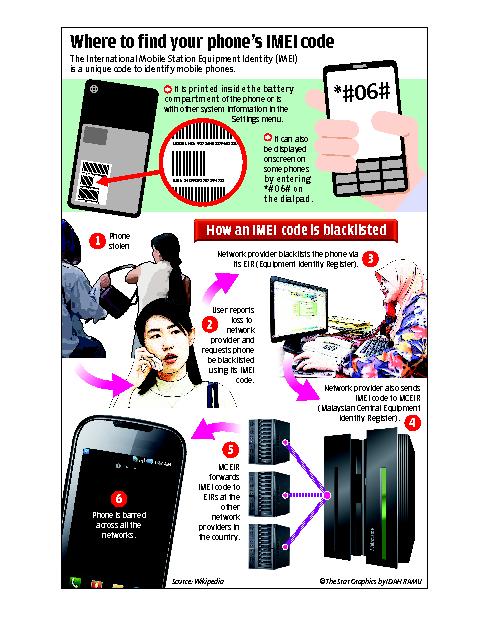 He said MCMC was ironing out some technical issues with the network operators before the service was launched.

Mohamed Sharil added that the telcos were not to charge their subscribers for the new service.

The operators had been told to instal an Equipment Identity Register (EIR) so that the 15-digit International Mobile Station Equipment Identity (IMEI) code that is unique to every phone can be blacklisted if the device is reported stolen. Each EIR will be linked to a Malaysian Central Equip­ment Iden­tity Register (MCEIR), to which the IMEI codes of stolen phones will be forwarded.

The source said all blacklisted IMEI codes would then be stored in the EIRs to render the phones unusable on any network and to block any attempt to reactivate the devices with new SIM cards. Once blocked, the phone cannot ever be reactivated.

“This can help reduce phone thefts and at the same time, assist the police to identify the thieves or anyone trying to reactivate the device,” the source said.

The telcos had been given three months to comply with the MCMC directive and the deadline expired yesterday.

Malaysia will be the first country in the region to introduce this IMEI barring system, according to the source.

MCEIR will be operated by the MCMC, which has outsourced the managing of the system to Nuemera Malaysia Sdn Bhd. The deal was signed about two months ago.

“Nuemera will operate MCEIR round the clock. It will be responsible for monitoring and generating the IMEI code blacklist. The information will be forwarded to all telcos within 180 minutes of the phones being reported stolen or missing,” said the source.

The source said the initiative would be extended regionally and the effort had been endorsed at the recent Asean Telecommunication Senior Officials Meeting and Asean Telecom­munication Ministerial Meeting.

The Star reported in December last year that the rising popularity of smartphones has made them one of the most sought-after loot.