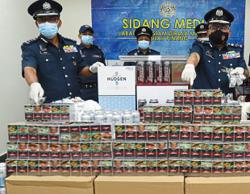 With the convenience of online shopping, the Customs Department has its hands full preventing illegal imports from entering the country.

THE festive season usually sees an increase in online shopping, so Customs director-general Datuk Seri Khazali Ahmad and his men are bracing for a busy time.

“We expect to see more packages coming in during Hari Raya, Christmas and other festive seasons and we try to make sure that these packages are not held up unnecessarily,” he assures shoppers.

He describes e-commerce as a challenge for the Customs Department.

“It’s a borderless world. With shopping being so easy now, there are more parcels for us to check and the modus operandi of people trying to smuggle prohibited items keeps changing,” he says, adding that e-commerce is not only attracting bona fide shoppers but also Internet-savvy crooks.

“Criminals are getting more creative by the day, so we need to always be one step ahead,” he says, adding that goods purchased online or by mail order are usually delivered via postal and courier services.

Customs officers at post office branches nationwide will check the declaration forms and relevant documents and all packages and parcels are screened by X-ray machines. Those with suspicious images will be physically examined.

Customs deputy director-general (enforcement and compliance) Datuk Matrang Suhaili explains that his officers, in the presence of Pos Malaysia staff, will conduct the necessary checks before determining whether an item is subject to tax.

“Tax will be imposed based either on the declaration documents or upon inspecting the items. However, we will request the purchaser to be present to examine the package together in order to determine whether tax should be imposed,” he says.

Customs director of intelligence R. Mariappa says non-prohibited items valued at RM500 and below are exempted from tax under the Customs Duties Exemption Order to “fast track” the process for the benefit of purchasers.

“If you buy a dress that costs RM2,500 as opposed to five dresses totalling RM500, the former will be taxed because we don’t look at the quantity of items purchased – tax is based on the cost,” he says.

Khazali says the rule is meant to facilitate genuine consumer transactions so that there’s no delay in receiving the purchases.

“This is especially so during festive periods when consumers are looking forward to receiving their dresses or gifts in time for the celebration, so we want to expedite clearance.”

The online purchaser, a 15-year-old student, was arrested after the Ipoh post office found the air rifles with brass pellets after scanning the parcels which had arrived from a foreign country.

The student can be charged under Section 135 (1)(a) of the Customs Act 1967 for importing weapons without a police permit, which carries a fine of up to 20 times the value of the contraband or up to three years’ jail, or both. He can also be charged under Section 36(1) of the Arms Act 1960 for possessing fake weapons which carries a maximum jail term of one year and a fine.

Khazali feels that the boy is not to be fully blamed. “Where did he get the credit card to make the online purchase from? You must understand that toy guns can be used to commit crimes – some look and feel very real.

“Such weapons may be fake but they look very solid and the pellets at close range can even kill.”

The department is also currently working closely with the Health Ministry to prevent the sale of the Quantum Pendant or Fusion Excel pendant and illegal pharmaceuticals, usually containing sex stimulants and slimming agents.

Two days later, the Ministry’s Pharma­ceutical Division senior director Datuk Eisah A. Rahman reportedly said that the ministry, Customs Department and Malaysian Communications and Multimedia Commission (MCMC) are hot on the trail of syndicates that have a number of websites peddling unregulated and untested pharmaceuticals.

Khazali says they have been assisting the ministry and the MCMC since last year to curb the sale of illegal pharmaceuticals.

But the problem is not just online. The MCMC can close down the websites but Malaysians will still travel abroad and try to bring in these illegal items, Khazali laments.

He says that while Customs officers are stationed at entry points into the country, it’s simply not possible to have the men line every inch of the border.

“We monitor KLIA very closely but when people come in via Sungai Golok (Thai-Malaysia border) or Singapore, it’s quite a challenge.

“Do you know that some 30,000 motorists commute between Singapore and Johor daily? Small items can easily be hidden in backpacks and pockets.”

Illegal drugs and sex stimulants top the list of most smuggled items into the country.

Citing examples, Khazali says young adults with raging hormones visit sex shops in Singapore or Amsterdam and excited, they try to smuggle sex toys or pornographic material into the country.

“They must understand that while it is legal there, it is not here because these items go against what society deems acceptable.”

He advises the public to check with the department (www.customs.gov.my/index.php/en/m-pelancong/243-larangan-importeksport) when unsure about whether their purchases will be allowed into the country under the Customs (Prohibition of Imports) Order 2008. 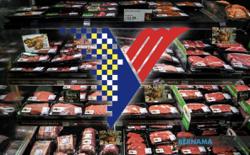 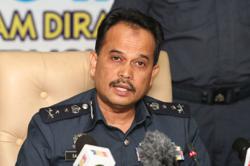