KUALA LUMPUR: Popular actress Sazzy Falak and television personality Datuk Aznil Nawawi met their starstruck fans at the Pavilion in Jalan Bukit Bintang but they were not touting their latest movie or album.

Instead, they were giving out 10,000 free T-shirts and caps and 100,000 pin badges under the Peace. Stability. Progress: Najib For Malaysia campaign under the PM Supporters Fan Club.

Aznil said celebrities could support whoever they wanted, adding that he was backing Prime Minister Datuk Seri Najib Tun Razak and Barisan Nasional as the country had grown economically since independence.

“Our campaign is not to put down any other parties.

“We are just here to promote Najib as his supporters,” said Aznil, 51.

The former Akademi Fantasia host said he was not too bothered by the thought that coming out in support of Barisan would affect his popularity among his pro-Pakatan fans.

“I want to be liked for my talent. If fans are supporting me based on politics, I think that is rather shallow. But everyone is free to have an opinion,” he said.

For Gol & Gincu star Sazzy, 32, her main objective was to encourage people to be interested in politics, adding, however, that “if you ask me, they (Barisan) have done a good job.”

The rainy evening weather did little to stop people from forming long queues in front of the shopping mall.

The fans, who were also treated to musical performances by local artistes Altimet, Awi Rafael and Narmi, were then encouraged to put on the items, take photos and upload them to social media websites with the hashtag #najibmypm in show of support.

The designs included Andy Warhol and Shepard Fairey-like illustrations of Najib with slogans like “Najib, My PM, Peace, Stability and Progress”. 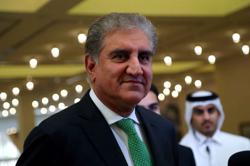 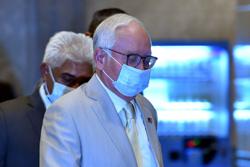