Lahad Datu: Sabah CPO - No halt to Ops Daulat until Sulu terrorists are flushed out

LAHAD DATU: Ops Daulat will not end until security forces are certain all the Sulu terrorists have been flushed out from areas where they are still holed up, said Sabah Police Commissioner Datuk Hamza Taib.

He said the security forces have not set a time limit when operations would cease because the fight against the terrorists had spread as far as Semporna and Sandakan, apart from Lahad Datu.

"It (the halt) depends on the security situation in the targeted areas and the operations involved," he told a news conference at Felda Sahabat near here Saturday.

Since Ops Daulat was launched 26 days ago, security forces have killed 68 Sulu terrorists, and arrested 443 individuals for various offences and 121 more under the Security Offences (Special Measures) Act 2012 (Sosma).

Hamza said the body of a terrorist killed on March 6 was retrieved from a battle scene in Kampung Tanjung Batu, Lahad Datu in the morning to bring the total number of bodies recovered so far to 46. - Bernama 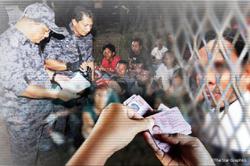