Suicide rate on the rise in Malaysia

PUTRAJAYA: The suicide rate is on the rise in Malaysia, with more than 1,000 people taking their own lives over a three-year period.

“These are just figures we collected from post-mortems. We think suicides are under-reported,” he told a press conference after chairing the Mental Health Promotion advisory council meeting here.

Of the 1,156 people who committed suicide over the three-year period, the majority were aged between 24 and 44.

Liow said this was alarming as the victims belonged to the productive age group.

“National statistics also show that men outnumber women three to one, while the Chinese had the highest number of suicides at 48%, followed by Indians (21%), Malays (18%) and other races (13%),” he said.

However, he said the country's suicide rate was far lower than the global average of 16 for every 100,000 people.

Given the increase in suicides in Malaysia, the Government had decided to launch a five-year National Suicide Prevention Strategic Action Plan starting this year, said Liow.

Part of the plan is to shift mental health treatment from being purely institutionalised in hospitals to more community-centric and to be made available at community mental health centres.

“By bringing mental healthcare to the clinics, the Government is adhering to the World Health Organisation's recommendations of getting the public to play a greater role in providing support for mental health patients,” said Liow.

The initial target is to set up one community mental health centre in every state this year.

“Currently, we have 224 psychiatrists in the ministry. The ratio of psychiatrists to the population is 1:150,000, but ideally we need to get a ratio of 1:50,000, which means we need a three-fold increase,” he said. 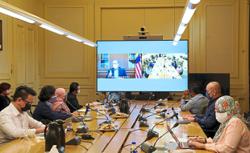