The ugly side of dog breeding

Her pet was most likely the result of unethical breeding by “puppy mills” mushrooming in and around the Klang Valley.

Unethical practices, including breeding between siblings and between sires and dams with offsprings, have been identified as among the causes why pet buyers end up with sick and weak puppies.

“I ended up crying my eyes out and spending most of my time at the veterinary clinic with her,” said Teoh, 25, who added that the puppy became ill after only four days.

The pet shop refused to refund her but gave her another puppy as a replacement instead.

“I did not want to go through another heartache, so I gave the puppy to a friend,” said Teoh.

A member of the canine welfare project Malaysian Dogs Deserve Better (MDDB) wrote in its Facebook community page that a Rottweiler she bought from a pet shop in Seremban became ill two days after purchase.

“I had to return it but the pet shop only gave me half the money back,” wrote the woman.

Another woman who bought a Jack Russell Terrier puppy from a pet shop in Petaling Jaya said it also came down with parvovirus infection soon after she brought it home.

“So much heartache and so much money wasted,” she said.

To meet rising demand for “too-cute-for-words” puppies, some pet shops are reportedly getting their stock from elusive backyard breeding facilities where cruelty is blatant.

According to SPCA head animal inspector Cunera Kimlon, the dogs in these places are either euthanised, abandoned in the streets or dumped at shelters when they cannot breed any more.

Kimlon recalled that the Selangor Department of Veterinary Services (DVS) busted one such place in Kajang in 2008.

“There were cages stacked on top of each other that were locked up in a shoplot. The cages were so small that the dogs could not move freely.

“There was only one worker hired to care for almost 100 dogs, which were mostly Shih Tzus.

“When the dogs saw us, they were barking frantically,” said Kimlon, adding that she was shocked by the level of cruelty inflicted on the animals.

She said the owner of the puppy mill, a Singaporean, was believed to have closed down his operations since.

As Malaysian Kennel Association-registered puppies can be expensive, many opt to buy from pet shops which offer non-certified puppies at cheaper rates.

“Most of these come from backyard breeders. You can get your choice of puppy for between a few hundred and a thousand ringgit,” said MDDB adoption coordinator Christine Lai.

She said the department was in discussion with the Housing and Local Government Ministry on formulating laws to address the issue of dogs being bred without proper guidelines.

On people buying specific breeds as guard dogs, Dr Fadzilah A'ini advised them to take breeds that were not guard dogs.

“What people do not understand is when cross-breeding takes place, a dog's ferocious characteristics may become more pronounced, making it more dangerous.

“Most guard dogs fall under the department's banned or restricted breeds' list and should only be trained for work with uniformed personnel,” she added.

Related Story: Vet: Puppies easily infected as they are sold too early 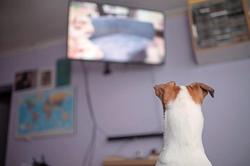