Building of new MRT second line to begin next November

The MRT Line 2 aims to connect Sungai Buloh to Putrajaya through Serdang via elevated and underground train lines.

“This is still at the proposal stage as we have to first put it up for public display, get public feedback first and then get approval from the government,” said MRT Corp chief executive officer Datuk Azhar Abdul Hamid.

He said this during a briefing on the progress of the MRT Sungai Buloh-Kajang line (MRT Line 1) project.

During the session, he also revealed the proposed alignment for MRT Line 2 which would have a total of 40 stations, with 31 elevated and nine underground.

Running a length of about 59.5km, this line would run from Kepong to Jalan Sultan Azlan Shah (Jalan Ipoh), Kampung Baru, KLCC East, Pandan Jaya, Pandan Mewah, Plaza Phoenix then on to Mines, Serdang and down to Putrajaya Sentral. 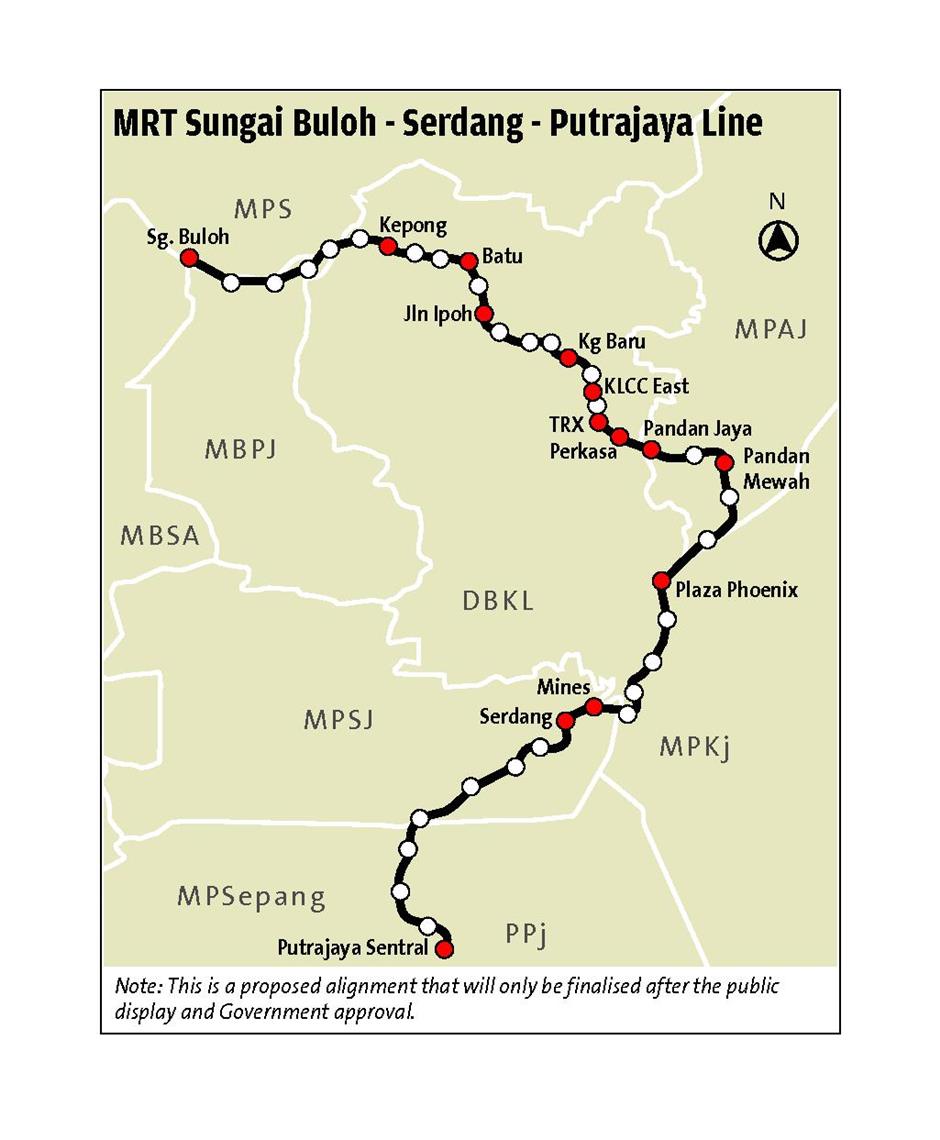 There would also be a small depot at the Serdang station.

Total length for the elevated alignment is 49.3km and for the underground it is 10.2km.

“We are still in the process of finalising this route and the public display session has been scheduled for March 2015,” he said.

He added that the approval of the final alignment had been scheduled to be finalised in August next year with tender calling for the underground contract to be in September.

In August, the tender process for elevated contracts would be called and was expected to be awarded by November 2015 for work to commence.

“We want to get things done simultaneously and we want the works to be carried out as soon as possible so that we can provide better public transport in the Klang Valley,” he said.

He added that all the work was in line with the government’s wish to improve and integrate the public transportation system in the Klang Valley.

During the session he also gave an update on the progress of MRT Line 1, which he explained was going according to plan.

He was confident that his team would be able to meet the targets and milestones set when the project started in 2011.

According to the plan, Phase One of the alignment between Sungai Buloh and Semantan stations would become operational by end of 2016.

The entire line had been scheduled to be operational by July 31, 2017.

“We have completed 53% (26km) of our elevated guideway spans and 70% of tunnel construction,” he said.

To date, all 9.5km of the underground alignment had been completed except for 1.2km of tunnels between Pudu and Pasar Seni MRT station.

They expect it to be completed by the end of the first quarter of next year.

In the meantime, MRT Corp was also in the midst of assembling the first three trains which would be used for testing at the Sungai Buloh Depot.

All this works had cost MRT Corp RM21.02bil for 78 work packages which had been awarded to contractors, with seven more work packages still left to be awarded.

Two are currently in the tender process and five more are yet to be tendered out.

“We do not expect the total construction cost to go beyond RM23bil, even with the remaining five packages,

“The other packages are just small ones which will cost less than RM250mil,” he said.