New highway to be built between Damansara and Kinrara 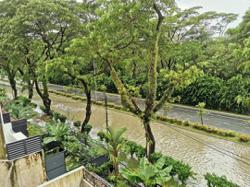 Open to public feedback: The Kinrara-Damansara Expressway is expected to reduce travelling time between Damansara and Kinrara by about 25%.

WHEN the Kinrara-Damansara Expressway (Kidex) is ready, it will reduce travelling time between Damansara and Kinrara by about 25%.

The traffic volume will also be reduced by 50% in both directions from Puchong to Petaling Jaya.

The highway is estimated to cost RM2.42bil and it will be a 90% elevated highway.

Work is expected to begin early next year and may take up to fours years to complete.

The acquisition of land could start as early as the end of this year.

“Kidex Sdn Bhd only signed the concession agreement in November last year and we want to engage with residents and community leaders to provide all the necessary details.

“We want to be transparent and I welcome feedback from the public. We want to provide all the details required,” said Mohd Nor Idrus, who was appointed as CEO on March 1.

When asked how many houses would be acquired for the construction of the highway, Mohd Nor Idrus said that in view of the high population density in its catchment area and the large number of built-up structures along its alignment, he said the highway would primarily travel along existing local roads.

Hence, he said only 380 lots of land would be acquired.

“The issue of land acquisition and compensation is under the Government’s jurisdiction.

“Of the 3,784 lots that will be affected by the land freeze, only less than 10% will be acquired. Most of it will be industrial lots,” he said.

He reiterated that Kidex would pass through one of the most densely built-up environments in Petaling Jaya.

He said the elevated highway would be built over it.

The highway will be approximately 14.9km in length, 11.2km of it are on elevated structures with dual-lane carriageways.

It will start at NKVE, near the Damansara interchange, and will end at the Bukit Jalil Highway near Kinrara.

A resident, Yoong Lai Hon who said he represented the community in SS2, Petaling Jaya felt the highway was not necessary.

“If the objective is to reduce traffic volume, then consider building a double-deck highway over the Damansara-Puchong Highway (LDP).

“The planned Kidex route will be passing the already concentrated business and residential area there.

“Only the proposed route along Jalan Penchala has residential area on one side and industrial on the other.

“Here, they can align the highway towards the industrial area.,” he said after viewing the Kidex plan exhibited at Tropicana City Mall.

He added that residents who bought their house recently, are anxious that their houses might be acquired.

Yoong said the issue of compensation must be addressed quickly.

There will be an open toll system with two mainline toll plazas at SS2 and Taman Medan Baru and another two ramp toll plazas at the exisiting Damansara toll.

For details, visit the Kidex exhibition at Tropicana City Mall, or log on to www.kidexskyway.com.